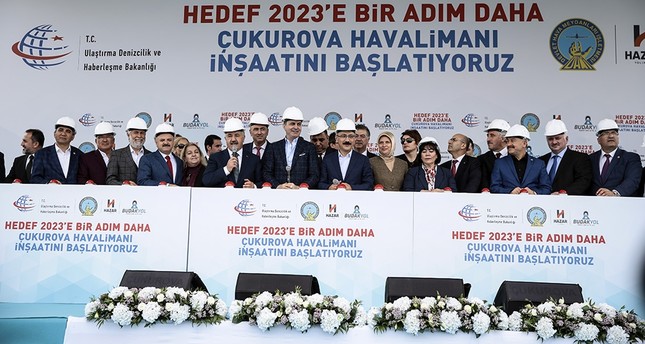 The ceremony for the commencement of construction at the Çukurova Regional Airport was held in Mersin yesterday with Transportation, Maritime and Communications Minister Ahmet Arslan, European Union Minister Ömer Çelik and Development Minister Lütfi Elvan in attendance.

Speaking at the ceremony, Minister Arslan, indicating that they want to put the airport into service as soon as possible, said they do not want to wait until 2019, which was the date previously announced for the completion of works, and declared they hope they will open the airport and terminal on Oct. 29, 2018.

Making evaluations about the airport, Arslan said: "The track to be built here is 3,500 meters long and 60 meters wide. It's one of the world's biggest tracks. We are making a proper runway for the A380, the world's largest airplane. Also, the airport will have the world's second-largest runway, which will be 3, 500 meters long and 45 meters wide. It will have an area where more than 15 planes can park at the same time when it opens." He said that the airport will have a closed area of 12,000 square meters. He said they will build 250,000-square-meter terminals, adding that, with all the indoor areas included, plus an area for cargo, they airport will have a 500,000-square-meter indoor area. He said the value of the construction that started yesterday is TL 221 million ($61 million), but said they are talking about an investment of around TL 1 billion with the airport's terminals and other enclosed areas and functions. He also said the airport will employ 2,500 people per year.

The Transportation, Maritime and Communications Ministry previously signed a contract with Hazaryol and Budakyol Joint Venture Group, which won the tender with a bid of TL 224, 874 million. According to the build-operate-transfer (BOT) model, the winning firm will assume responsibility for the new airport, which will serve 30 million passengers annually.

Çukurova Regional Airport will be located in the Tarsus district of Mersin province in southern Turkey. It will serve the provinces of Mersin and Adana as well as the rest of the Çukurova region. The airport will serve both domestic and international flights. Also, the proximity of the new airport to Adana and Mersin city centers is considered to be advantageous in terms of easy transportation.