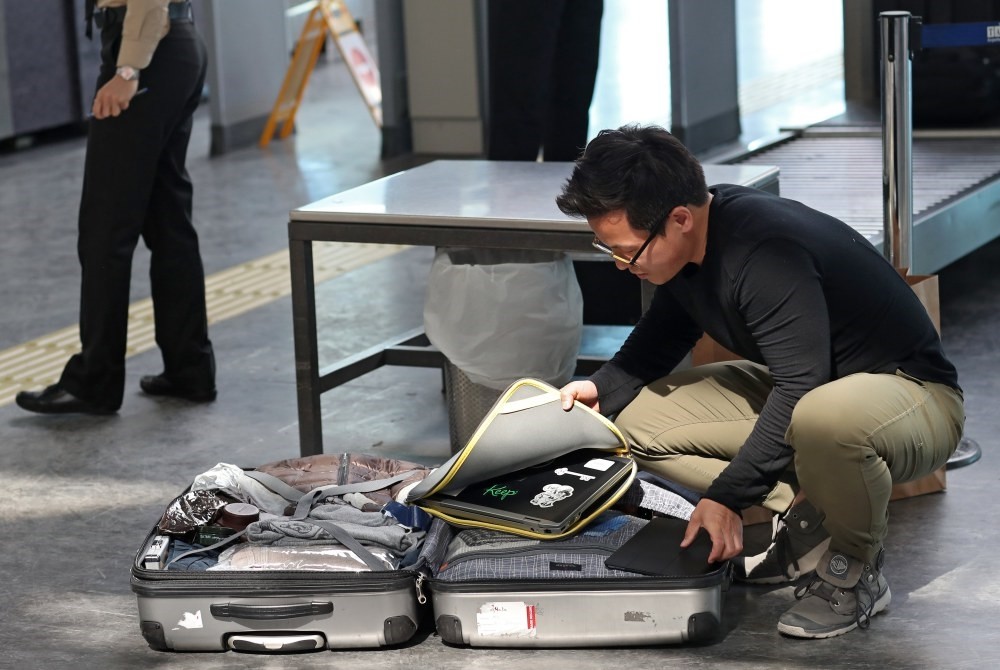 Passengers open their luggage and show their electronic equipment at a security point at Atatu00fcrk Airport in Istanbul.
by Jun 03, 2017 12:00 am

Air travel is heading for a bumper year, but global airline leaders meeting in Mexico are concerned about the impact of an escalating row over laptop bans and rising protectionism

Although the industry has overcome previous losses to notch up an eighth successive year of profit, the International Air Transport Association (IATA), which groups 275 airlines and meets from June 4-6, is now facing new challenges. The Geneva-based group is at odds with President Donald Trump over efforts to widen a partial U.S. and British security ban on laptops in cabin baggage. It is also worried about what it sees as protectionist rhetoric from Washington and Europe, saying this could temper growth in demand for air travel and freight.

"You see that in Europe, you see that in the U.S. ... Any barrier to borders, we consider as a threat," IATA director general Alexandre de Juniac told reporters. IATA said on Thursday that passenger traffic rose 10.7 percent in April, the fastest rate of growth since April 2011. But restrictions on large electronic devices in the cabin, imposed in March on certain flights, were hitting traffic between the Middle East and the United States. Airlines and airports are waiting to see if the United States will extend the restrictions, with the Department of Homeland Security yet to announce a decision.

IATA has proposed more stringent passenger screening as an alternative and has joined European regulators in citing the fire risks of having many lithium-powered devices in the hold.

"We recognise the (security) threat, we have no doubt about that, but we doubt the measure," de Juniac said, adding the U.S. government now seemed in more of a "listening mode".

The IATA conference could hear concerns from Middle East carriers who believe they are unfairly targeted by the ban, with Emirates, Qatar Airways and Turkish Airlines among the most affected by restrictions on U.S.-bound flights from some Middle East and North African airports. U.S. officials have denied targeting any group of airlines or acting over anything other than pressing security concerns.

United Airlines' widely-criticised removal of a passenger from one of its planes and the British Airways computer meltdown over a holiday weekend, which stranded thousands of passengers, have highlighted other challenges the industry faces.

"There are elements here that are specific to BA, but if airlines do not transform their operational systems and learn from this, then we could be seeing more such incidents," Euromonitor travel project manager Nadejda Popova told Reuters.

Such incidents emphasise the fine line between operational success and failure in an industry transporting 10 million people a day on razor-thin margins.

IATA will on Monday update forecasts that suggest the industry's net profits will fall 16 percent to $29.8 billion this year after peaking in 2016, hit by fuel and labour costs. Although traffic is rising, this is partly driven by cheaper fares. But yields - or average revenue per passenger - look set to stabilise this year, IATA chief economist Brian Pearce said.

ForwardKeys, which analyses booking reservations, says global long-haul air travel bookings for June, July and August are 6.4 percent ahead of where they were last year.

A surge in the popularity of low-cost long-haul travel will also weigh on IATA members, most of whom are national carriers and whose share of global traffic has already been eroded by local budget rivals outside the 72-year-old club.

Highlighting the threat to traditional carriers, Norwegian Air Shuttle announced expansion plans from Rome and Iceland's Wow Air said it would offer one-way fares between Europe and the U.S. from as little as $55.