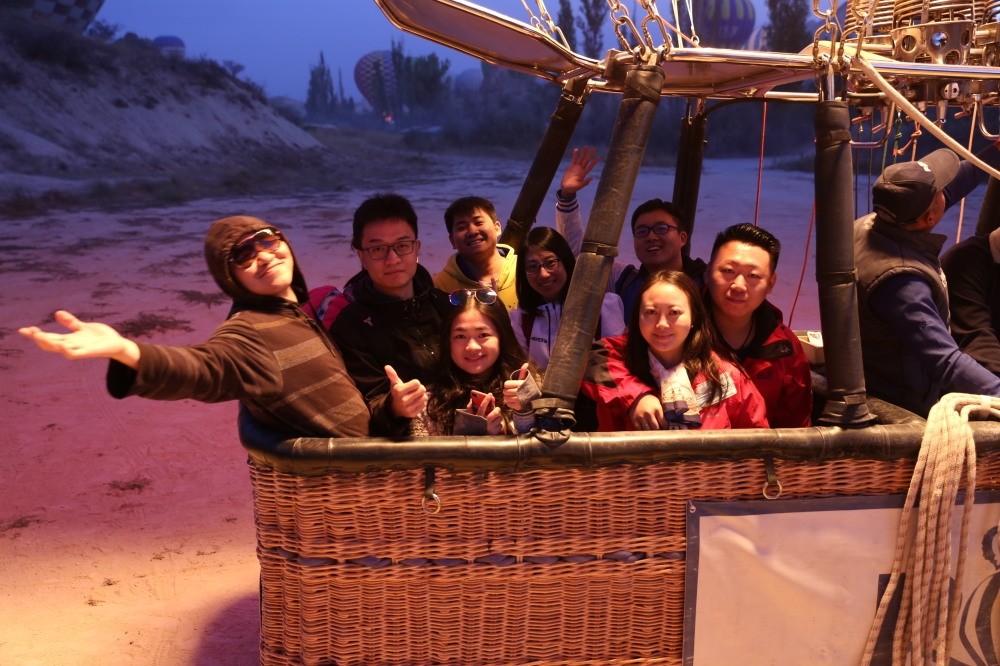 Chinese toursits seen in a hot-air balloon in Turkey's Cappadocia, famous for its fairy chimneys, underground cities and rock-carved monasteries.
by Daily Sabah with AA Oct 02, 2017 12:00 am

Yakup Dinler, head of the Cappadocia Touristic Entrepreneurs Association (KAPTİD), told reporters that 15,000 Chinese tourists will be welcomed in the region in the first 10 days of October.

Noting that hot air balloon tours are the main reason why Chinese tourists prefer Cappadocia, Dinler said a 100 percent occupancy rate has been achieved in hot balloon tours due to bookings made until Oct. 10.

"Eighty percent of tourists from the People's Republic of China want to participate in the balloon tours. So, we have 100 percent occupancy rate in balloon tours in the next 10-day period."

Highlighting that the tourism sector in Cappadocia is experiencing a more active period than the previous year, Dinler said there are Chinese tourists coming to the region because of the holidays in their country. "We will host about 15,000 Chinese tourists in Cappadocia during this 10-day period. This is a good figure for our region. There is serious mobility in the region right now. These people come both individually and on tours organized by agencies," Dinler said, stressing that they will contribute to the region in every area. "They participate in the balloon tours in the early hours of the morning and visit our museums during the day. Generally, good days are ahead of Cappadocia in every area in these 10 days," he added.

Tourists visiting the Göreme Open Air Museum, Paşabağı, the Zelve Ruins, Derinkuyu and the Kaymaklı underground cities, can take a hot air balloon tour and have a bird's-eye view of the region.

Chinese tourists who came to the balloon departure area in Göreme in the early hours of the morning took souvenir photos in front of the hot air balloons prepared for the flight and then up in the air above the city.

Mustafa Durmaz, head of Göreme Tourism Development Cooperative, also stated that most Chinese tourists who prefer Turkey for holidays want to pay a short visit to Cappadocia as well.

Pointing out that Far Easterners show interest in Cappadocia's natural and cultural riches in autumn and winter season, Durmaz said that the visitors from China have increased the occupancy rate in the hotels.