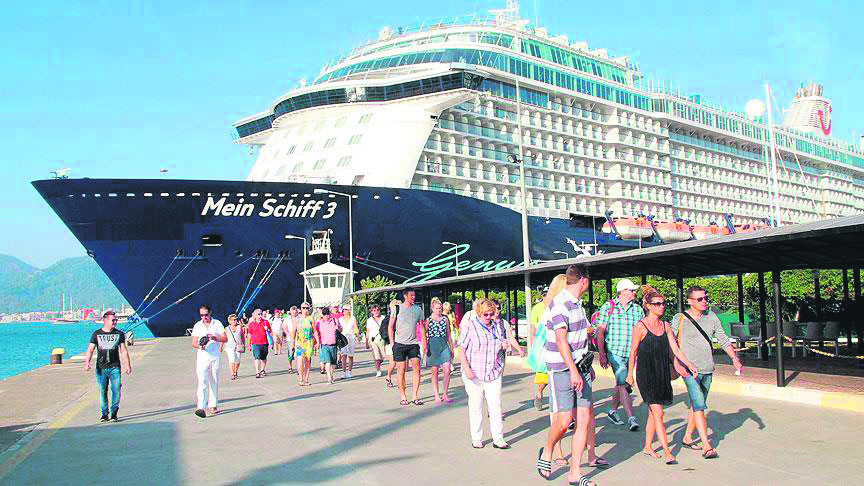 In order to encourage cruise tourism, the government will provide travel agencies seasonal financial support from $25 and $45 per passenger, Culture and Tourism Minister Numan Kurtulmuş said yesterday, adding that with the support, they also plan to increase number of ports in theu country.

Elaborating on the financial support of $30 per passenger provided to A-group travel agencies that bring tourists to Turkey on cruises, Kurtulmuş said they plan to carry out a new study that includes a seasonal system.

He said they will provide financial support to travel agencies of $25 per passenger during the high season, $35 during the normal season and $45 during the off season.

The government will provide a much stronger incentive by diversifying support and increasing the number of ports, Kurtulmuş said.

He added that they want to spread tourism support to 12 months by taking seasonality to the forefront of their plans.

Elaborating on tourism incentives, he said work is being done on fuel support to be provided to planes bringing tourists to the country, which would vary between $1,500 and $9,000 and last for 12 months.

Around 278 cruise ships docked at 16 Turkish ports during from January to September of this year, with Kuşadası leading the way among ports, according to data from General Directorate of Maritime Commerce.

Turkey has experienced a rapid recovery in tourism in 2017 after a serious fall in 2016, Kurtulmuş said, adding that the ministry expects to close 2017 with 31.4 million tourists and around $26 billion in tourism revenue.

He also emphasized that the country experienced a 28 percent increase in the number of tourists in the first 10 months of this year when compared to the same period last year. He also said the figures expected to be achieved by the end of the year would show much higher growth than Turkey's economic development.

Underscoring that the country's tourism has recovered in a short period, Kurtulmuş said the industry will experience a much better atmosphere next year.

"I estimate we will reach 2014 figures in 2018. We hope to see 38 million tourists coming to the country in 2019. We also hope to achieve the target of 50 million tourists and $50 billion in tourism revenue we set for 2023," the minister said. He also said work to diversify the industry's market and products are underway, adding that very good momentum and mobility has emerged. He also said everybody participated in the work with great devotion, particularly after the tourism summit that took place on Nov 1-3.