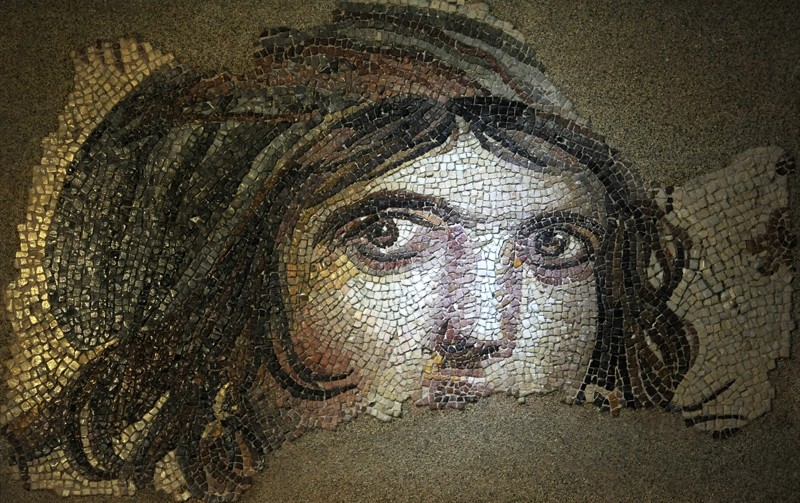 The number of visitors in the world's biggest mosaic museum located in Turkey's southeastern city of Gaziantep reached 168,740 in 2017, marking a 55 percent increase compared to the previous year.

Around 108,479 people visited the museum in 2016, Gaziantep's Provincial Director of Culture and Tourism Bülent Öztürk said.

Zeugma Mosaic Museum, which opened in 2011, has attracted thousands of tourists from around the world with its stunning historical mosaics.

The "Gypsy Girl" mosaic is among the most famous pieces on display at the 30,000-square-meter museum.

The Gypsy Girl's disheveled hair, prominent cheekbones and haunting eyes have become the face of Gaziantep since the mosaic was unearthed in the ancient city of Zeugma.

"Most of the visitors come to the museum to see this mosaic specifically," Öztürk said.

The Gaziantep Metropolitan Municipality has attempted to make this important work whole again, as there are many missing pieces which have been stolen and sold by smugglers. Some pieces are currently on display in the U.S. at the Wolfe Arts Center of Ohio Bowling Green State University.

There are also several fountains dating back to the Roman Empire on display in the museum.

The ancient city of Zeugma was founded in present day Gaziantep by one of Alexander the Great's generals in 300 BC and was conquered by the Roman Empire in 64 AD. It is known for its wealth of ancient Greek mosaics, frescoes, and artifacts.