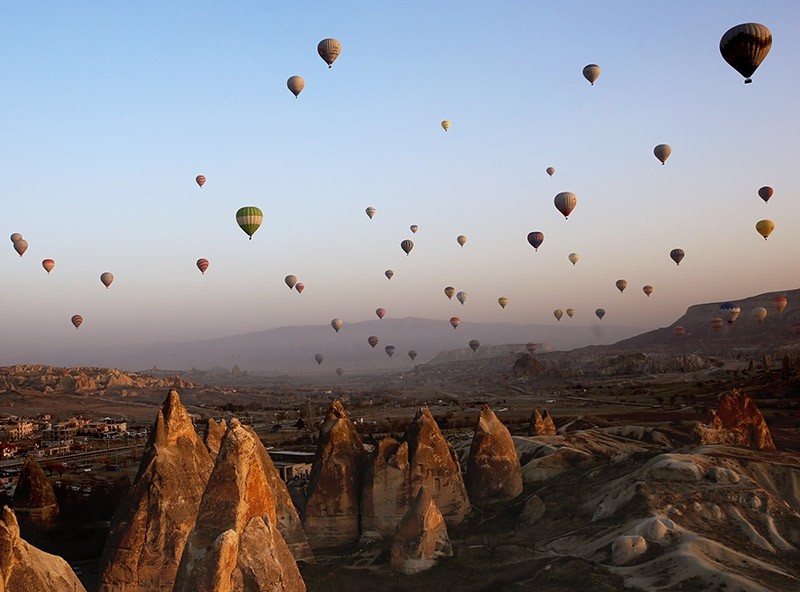 A total of 329,390 tourists enjoyed a bird's-eye-view of famous tourist spot of Cappadocia in Turkey's central Nevşehir province with hot air balloon rides in 2017.

According to a data gathered by Anadolu Agency from Directorate General of Civil Aviation, the number of tourists, who took the hot air balloon rides in Cappadocia, increased by 32 percent in 2017 compared to 2016.

There are 25 hot air balloon agencies in Cappadocia, where a total of 19,843 balloon tours were organized in 2017, according to the data.

A balloon agency owner, Tevfik Ölmez on Wednesday told Anadolu Agency that they expect more tourists in 2018. "Cappadocia is the place, where commercial balloon flight is intensively made."

"Depending on the meteorological conditions, 100-150 balloons can make daily flights," he added.

"Even though balloon tours can be held in different places, Cappadocia is a unique place with its weather conditions and panorama for this organization," Atay added.

Cappadocia is preserved as a UNESCO World Heritage site and is famous for its chimney rocks, hot air balloon trips, underground cities and boutique hotels carved into rocks.

To get the authentic experience, tourists from all over the world prefer to experience Cappadocia's landscapes and peak-like rock houses.

The hot air balloons are also being tracked by a GPS system, allowing the speed limit and distance of the air balloons to be detected.