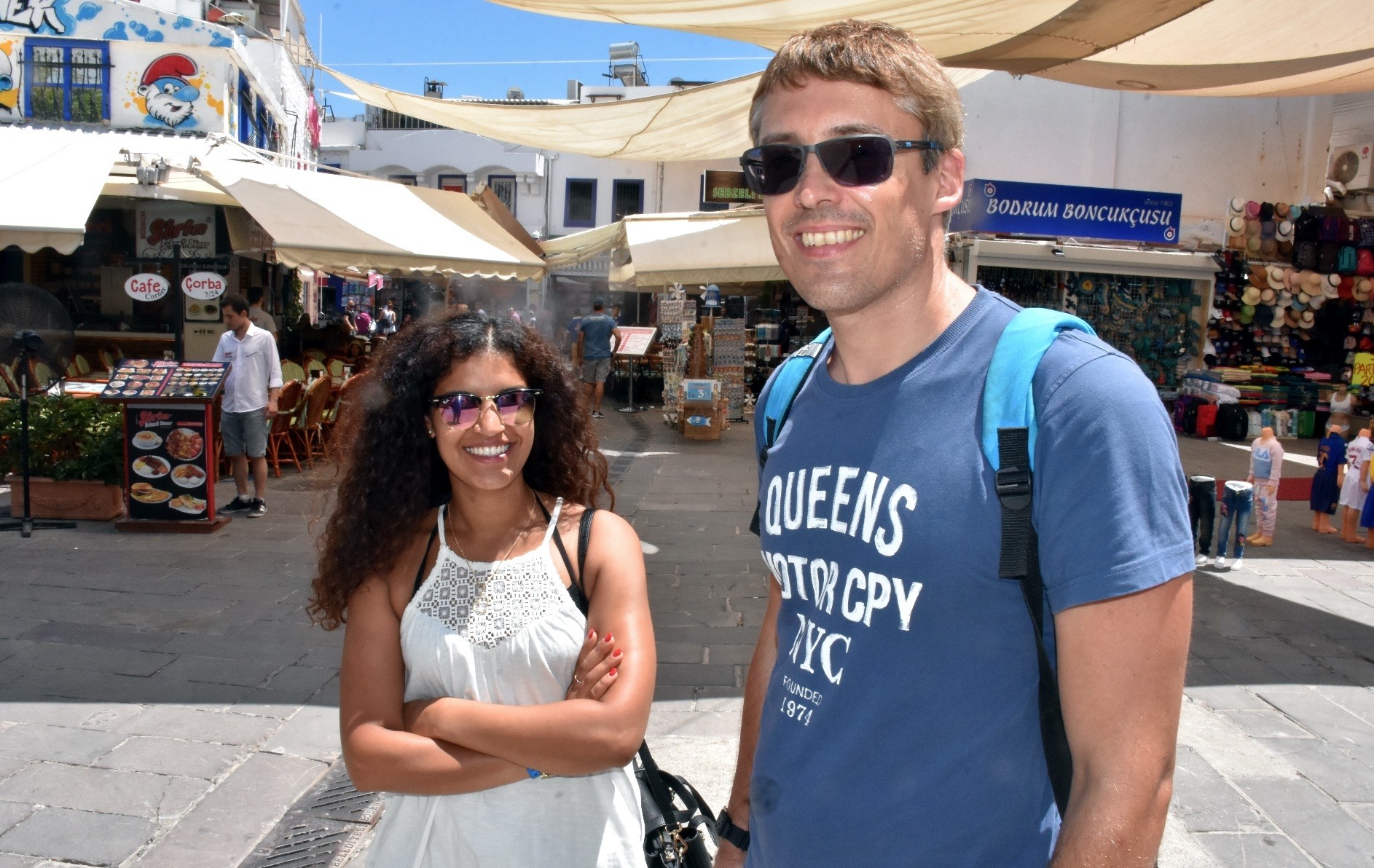 Foreign tourists coming to the coastal resort town of Bodrum praise its cultural riches, beaches, dishes and people. Many of them also express their spiritual closeness to the seaside town

For decades foreign tourists who prefer Turkey's southwestern Muğla's Bodrum district for vacation, have referred to it as the country's ultimate destination and dubbed it the Turkish Riviera.

Renowned for its cultural riches and unique natural beauty, Bodrum is a top holiday destination for many tourists who regard it as their "second home."

Jo Clarke, a British tourist enjoying Bodrum's sea, sun and cultural riches, said she has been vacationing in Bodrum for 15 years and loves it very much.

Clarke said she first came to town with her family at the age of 15.

"My aunt bought a house in Gümüşlük. My family loves Turkey. It is a relaxing place with very nice people," Clarke said, stressing that Turkey has a special importance in her heart.

The coastal town has everything an ultimate holiday destination should have. It is dotted with beaches, shopping malls, cinemas, restaurants, while it is also famous for its nightlife and upscale nightclubs.

Tim Mühler from Germany visited the town for the first time. "We traveled a lot in Bodrum and visited historic windmills. We knew Turkish dishes from Germany but the food here is better. A guide said 'Bodrum is Turkey's Saint-Tropez.' The ambiance is very nice, people are friendly, and it is a very beautiful place," Mühler said.

Jan Jadersand, a Swedish gymnastics teacher spending his holiday in the Bitez Quarter, pointed out that Bodrum is a fantastic town.

Recalling that he has been coming to the town for 10 years, Jadersand said, "I have come to Bitez once again. When I come to Turkey, I love swimming and lying on the beach. I love the sun very much. I will continue to come to Bodrum."

After seeing a sharp decline in the number of visitors in 2016, a year that included a series of terrorist attacks and a failed coup attempt, Turkey's tourism industry saw a recovery in 2017. It experienced a drop in the number of tourists that began with a Daesh suicide bombing that killed 12 German citizens and injured 16 others in Istanbul's Sultanahmet area in 2016.

The country has been fighting not only against terrorism, but has also been subjected to an anti-Turkey smear campaign carried out by the Western media.

Nearly 11.5 million foreigners visited Turkey in the first five months of this year, according to the Culture and Tourism Ministry.

The ministry said that the figure rose by 30.8 percent on a yearly basis, up from 8.8 million in January-May last year.

The country's tourism revenues rose by more than 18.9 percent in 2017 as it hit $26.3 billion from $22.1 billion in the previous year, according to the Turkish Statistical Institute (TurkStat).

Zeynel Kılıç, a 26-year-old tourism professional who owns a hotel and a nightclub in Bodrum, says that they have experienced a substantial recovery in tourism this year.

Kılıç said Bodrum is in great demand, explaining that foreign tourists filled the gaps in Ramadan and the election period very well.

"This year our hotel is completely booked until the end of September. We welcome our European guests. We host our guests, who have been coming for years, once again this year," he added.

"Some of our Irish guests who love Turkey come to the district after long hours of travel and transfers, even though there is no direct flight. They come to Turkey after a 10-12-hour journey because they love it here," Kılıç continued. "This is due to our hospitality as tourism professionals. We have good potential. Hopefully, next year will be even better."

He explained that there are tourists who have been coming every year for 25 years and now there are foreigners investing heavily in real estate.

Kılıç said that these same people also live in Bodrum for a certain period of the year and they definitely see Turkey as their home away from home.

Orhan Kavala, the secretary-general of the Bodrum Hoteliers Association (BODER), said that during the first period of tourism season, they mainly host British, German, Dutch, Ukrainian, Russian and Polish guests.

He also pointed out that Bodrum's tourist potential expands every year.

"While the number of British and Dutch tourists was higher in the previous years, this year four to five countries also increased in number," Kavala said. "The arrival of these countries in the district will also bring back the former high season. In previous years, there were guests from all countries and they were spending their holidays together."

"The present bed capacity of Bodrum definitely meets the incoming tourists at one hundred percent. There is even idle capacity and they can also be commissioned to easily host many more tourists," he added.