Turkey expects another stellar year for tourism in 2019 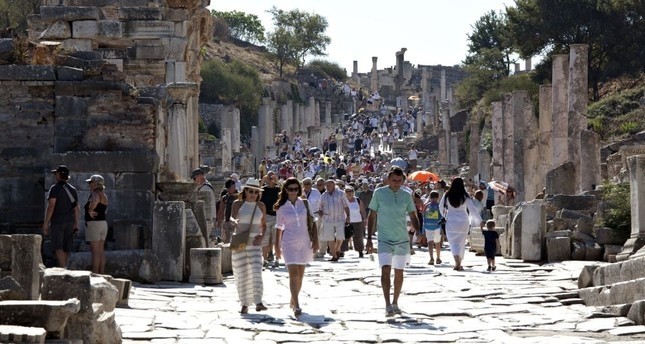 Tourists walking on u0130zmiru2019s Curetes Street, which is one of the main streets of Ephesus, connecting the Magnesia gate to the Koresos gate.
by Betül Alakent Aug 20, 2018 12:00 am

Turkey's positive ties with others, especially the European countries, have had a great impact on its tourism sector. Global travel agencies that bring tourists to Turkey have already begun signing contracts with local hotels for the next year. The initial figures suggest that a record number of tourists from Germany, China and the U.K. would visit in 2019, tourism professionals said.

Burak Tonbul, a board member at Diana Travel - the Turkey representative of Thomas Cook, said that the tension between Turkey and the U.S. has reflected positively on the Turkey-European Union ties.

He added that a positive political climate was immediately reflected on tourism. In Germany, there is great demand for a holiday in Turkey in 2019.

Tonbul said that contract signing with hotels are normally done late October and early November, but have been pushed forward this year. "Due to the serious demand this year, we have started to sign contracts early in August. There is little anti-Turkish feeling in Germany now. In fact, the positive feelings for Turkey have increased with improving relations. We think that the number of German tourists in Turkey will reach an all-time high next year," he said.

He added that the same trend might be seen in the number of British tourists, who are taking a greater interest in Turkey.

Tonbul said that despite the early sales, hotel room prices have increased 7 percent on a euro basis. So, tourism revenue per capita may likely exceed $700 next year from its current $630.

Qatar announced that it would invest $15 billion in Turkey, after the U.S. currency attacks last week. The country has once again shown it was on Turkey's side. Its flag carrier, Qatar Airways has changed the routes of 24 flights to Turkey after Saudi Arabia, Egypt, Bahrain and the United Arab Emirates imposed an embargo on the country.

The airline company is bringing tourists to Turkey from Far Eastern countries like Malaysia, Indonesia, Japan and China.

Qatar Airways, which runs 17 flights to Turkey from six different regions in China on a weekly basis, will increase the number of weekly flights to 24 next year.

Tourism professionals think that this move will make a major contribution to achieving the target of attracting 500,000 tourists to Turkey.

He added that around 250,000 Chinese tourists will be visiting Turkey this year and underlined that this number will double next year.

Meanwhile, Russian and Iranian tourists, despite facing major troubles for being heavily exposed to U.S. sanctions, continue to come to Turkey.

Mercan Tourism CEO Cüneyt Mengü said that there has been stagnation in the number of tourists coming from Iran, continuing, "However, this stagnation is due to economic reasons rather than political ones. If the Ministry of Tourism, the hotelier associations and agencies work together next year, we can exceed 2.5 million tourists from Iran."

Neşet Koçkar, head of Anex Tour - one of the biggest players in the Russian tourism sector, said that they would break a new record in Russia this year. "If the aircraft fuel support to Russia, which suffers from economic problems, continues in 2019, the number of tourists will increase," he said.