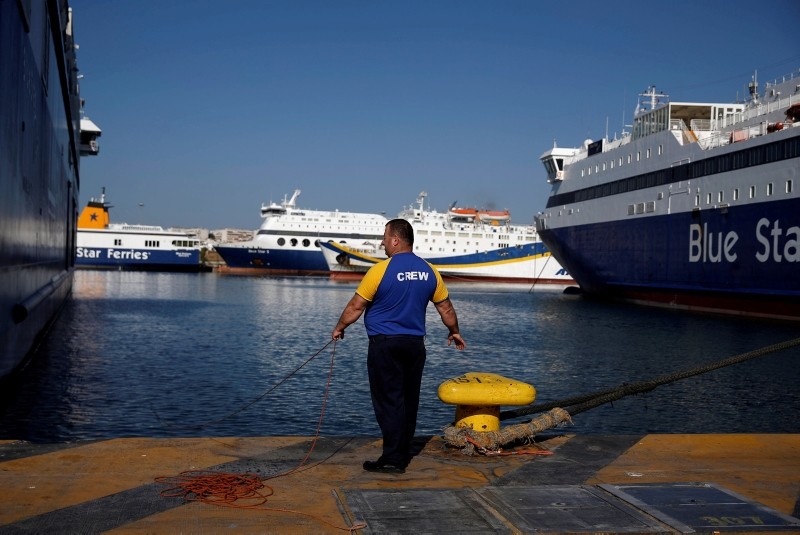 A seaman holds a rope next to a moored passenger ferry during a second consecutive 24-hour strike of Greece's seamen's federation PNO against austerity policies affecting their sector, at the port of Piraeus, Greece, Sept. 4, 2018. (Reuters Photo)
by Compiled from Wire Services Sep 04, 2018 12:00 am

Greek ferry crews have ended a strike that left tens of thousands of travelers and islanders stranded for more than a day.

The main seamen's union, PNO, decided Tuesday to return to work immediately, after ferry operators offered them a 2-percent pay increase after an eight-year freeze because of Greece's debt crisis.

That means that ferries will start sailing as soon as possible, instead of after 6 a.m. (0300 GMT) Wednesday when the strike had originally been due to end.

PNO had initially been pressing for a 5-percent pay hike.

The strike, launched early Monday, caused considerable disruptions as most islands have no air link with the mainland.

Seamen, backed by other sectoral unions including dockers and merchant marine engineers, extended the strike to demand wage increases and the reinstatement of labor rights after the expiry of the country's third bailout.

"I am very angry," Simeon, a Ukrainian tourist who had made plans to travel to the island of Crete but was stranded at Piraeus port, told Reuters earlier on Tuesday. "I don't know what I'll do today".

The walkout forced many shipping companies to reschedule sailings and holidaymakers to seek alternative ways of travel in a country where tourism is a pivotal industry for the economy which is slowly emerging from a huge debt crisis.

Tourism arrivals are seen rising to a record 32 million this year, industry officials have said. Traffic at Greek ports picks up during the summer, the peak tourism season, with Piraeus being the gateway for about 20 million passengers annually.

After eight years of austerity prescribed by Greece's international lenders, its euro zone partners and the International Monetary Fund, the left-led government has pledged to reverse unpopular labor reforms and raise wages.

PNO previously said that workers have not received an increase in the past eight years and recent negotiations with their employers over a new collective agreement that would include wage increases did not bear fruit.

Unions accuse shipping companies of offering workers very low raises that do not correspond to their profits in recent years.