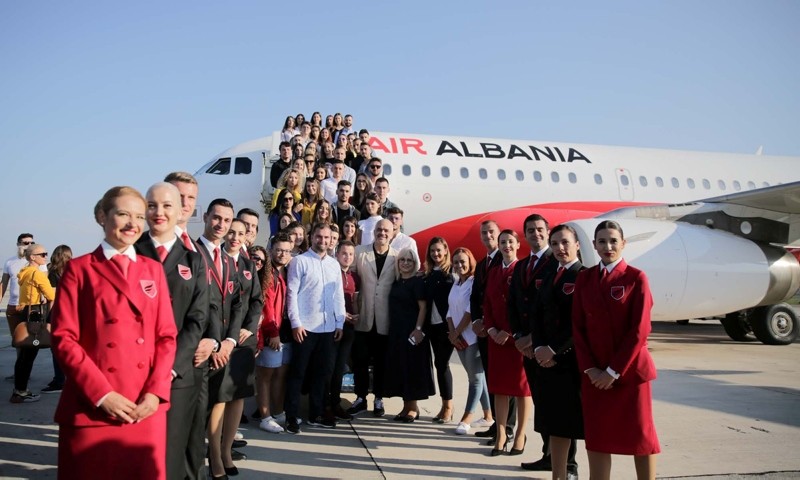 Speaking at the event, Rama said Air Albania was a strategic and long-term institution backed by Turkish Airlines, an undisputed global actor in the airline industry.

"We could not be here without the initiative and generous support of [Turkish] President [Recep Tayyip] Erdoğan," Rama added.

Yöruk said Air Albania has made its test flight from Istanbul to Tirana and will make a return flight to Istanbul on Saturday carrying 80 Albanian students.

He described the new air carrier as a "bridge" between Turkey and Albania.

"Turks and Albanians will be able to visit each other faster and cheaper."

Turkish Airlines board member Mithat Görkem Aksoy said this was only the beginning.

"We will make much bigger investments in Albania," he added.

On Wednesday, Turkish Airlines announced the establishment of the joint venture company.

In a statement sent to Turkey's Public Disclosure Platform (PDP), an electronic system through which electronically signed notifications required by capital markets and Borsa Istanbul (BIST) regulations are publicly disclosed, Turkish Airlines said the new company will operate in the field of passenger and cargo transportation.

"The aforementioned company will be established with capital of up to $30 million," it said.

The flag carrier said stakes of 49 percent, 41 percent and 10 percent are being held respectively by Turkish Airlines, MDN Investment SHPK and Albcontrol, which manages Albania's airspace and air traffic, representing the government of Albania.

Turkish Airlines earned some 24.4 billion Turkish liras ($5.9 billion) of total revenue in the first half of this year, while the company had nearly 25,000 staff, including more than 4,500 pilots.

Turkish Airlines, founded in 1933, flies to more than 300 destinations in over 120 countries with its fleet of 325 aircraft. According to the airline's end-year targets, the company expects to carry 75 million passengers in 2018.

A total of 50.88 percent of the airline's stocks are publicly traded on Borsa Istanbul, Turkey's stock exchange, while the rest are owned by the Turkiye Wealth Fund.

Turkish Airlines had a market value of 24.8 billion Turkish liras ($3.9 billion), based on stock exchange figures, as of the market close on Wednesday, Sept. 12.