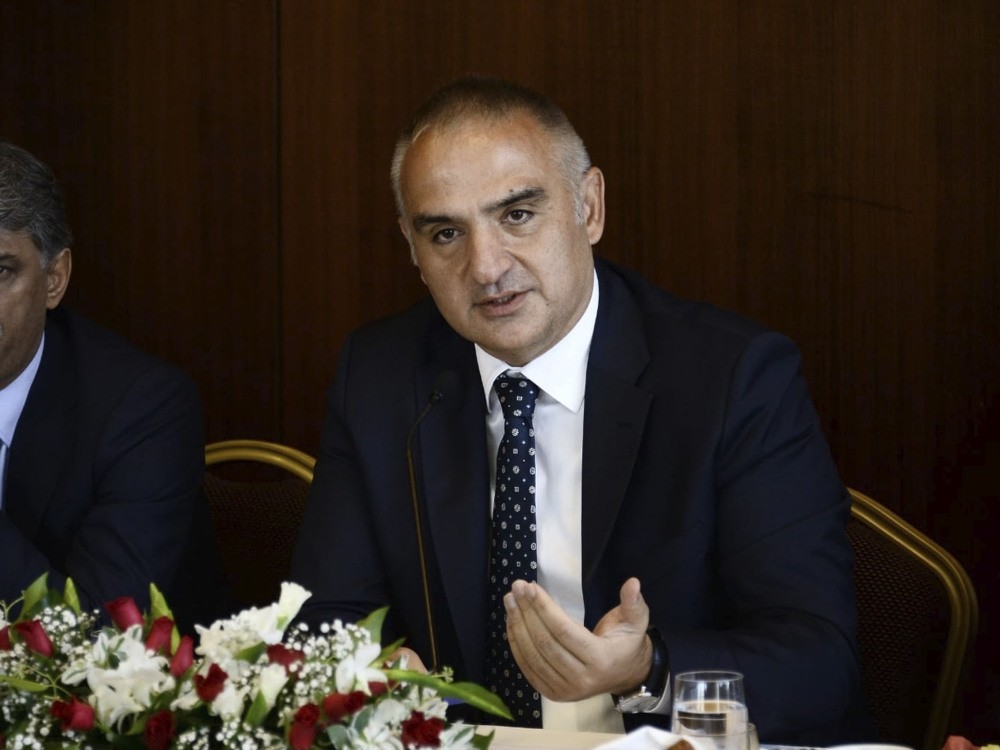 Culture and Tourism Minister Mehmet Nuri Ersoy speaks during his meeting with Ankara-based representatives of newspapers and television channels.
by Daily Sabah Sep 15, 2018 12:00 am

"We will make up-to-date promotional campaigns that will make an overwhelming impression on social media for people like YouTubers and trendsetters," Ersoy noted.

In his meeting with Ankara-based representatives of newspapers and television channels, the culture and tourism minister spoke about the tourism industry and the government's future plans.

Ersoy said that he entered the tourism sector with his twin at the age of 17 in 1985 when his father, who was an investor, leased out his holiday house, thinking that hotel management was a hard business that did not suit him. Indicating that they were initially engaged in both guiding tourists and student tours, Ersoy said that they established ETS Tour after graduating from university.

Referring to those times, Ersoy said: "In 1997, we became the market leader, and in 1999, we got the hotel back from our tenant to establish this company and entering the tourism sector. We got the hotel back by placing the highest bid. I mean our father did not do us a favor, which I think was the correct behavior."

Pointing out that they expanded the hotel business by entering the aviation sector later, Ersoy said that they de-merged the companies with his twin Murat Ersoy when they grew much larger 11 years ago. The minister added that after President Recep Tayyip Erdoğan appointed him as the culture and tourism minister on July 9, he transferred all the duties of the management board to his colleagues on the executive board on July 11. "Now, I am only a shareholder in my companies. This is something good for proving how our company was ready to be institutionalized."

In response to the question of whether he thought that he would be a minister one day, Ersoy said that, while he was working in the tourism sector, he often appealed to authorities to complain, arousing the idea that since he complained so much, he knew much about the sector. The minister also said that he came to know that things are different in the ministry than he thought.

Touching on the structural changes to be made and new strategies to be followed in tourism, Ersoy noted that tourism has many stakeholders and that all of them need to be gradually improved.

Recalling that Turkey branded mass tourism by developing the "all-inclusive" concept in the 1980s, Ersoy said: "Mass tourism has really achieved success, and we hope to attract 40-42 million tourists this year, which is a really big figure. I think Turkey has completed its mission here, and we need to switch to the second stage, which is a new section for the sector. In parallel with mass tourism, we need to switch to qualified tourism and qualified tourists."

Emphasizing that he did not mean to say that they would annihilate mass tourism, the minister said, "We will continue with mass tourism, but we will rapidly initiate a switch to qualified tourism."

Pointing to the fact that charter tourism is faced with challenges like improving quickly and declining quickly, Ersoy said that they plan to launch "direct scheduled flights" and, if possible, "scheduled business class flights" to remove this problem.

"For instance, we will continue to join major fairs; we will launch very properly wherever we are, but we will be in places where it is need; we will seriously increase our advertising and promotional budget and we will separate it from much of the work we unnecessarily do. By 2019, you will see that our advertising budget has grown significantly, and you will notice that the form of our advertising campaigns has changed. We will make up-to-date promotional campaigns that will make an overwhelming impression on social media like YouTubers and trendsetters. We will conduct studies that will change Turkey's perception of tourism. Our preparations for this are ongoing, and you will start to see these changes as of January 2019," the minister said.

Underlining that they will focus on major destinations to which scheduled flights are conducted, Ersoy said that they will initially concentrate on the top 10 countries from where

the greatest number of tourists come to Turkey, such as Russia, Germany, the U.K. and the Netherlands and will try to expand this to top 20 countries.

Regarding booking.com and Uber applications, the minister highlighted that these are digital capitulations, saying, "They have started to interfere in the commercial rights of your country without a single bullet." He added that Uber and booking engines such as booking.com are not well-intentioned on the issue. Ersoy further indicated that booking.com opened a company in Turkey but makes out invoices to Amsterdam, a tax haven, and its founders are Americans, saying, "This is a very good digital capitulation." The minister emphasized that while the U.S. increases tariffs on imported Turkish steel, it does not apply tax on such digital services.

With regard to studies to be conducted in culture, Ersoy said that they would highlight archaeological and cultural values in next year's promotional campaign. Since 70 percent of the Presidential Symphony Orchestra (CSO) building in Ankara has been completed, Ersoy underlined that they are trying to switch to the concept of "living museum" related to museums.

The minister also evaluated museum entrance fees, saying that the museum card price is TL 5 ($0.81) higher than the most expensive museum entrance fee. He continued, "You can visit all our museums a year for TL 70. So, if you go once a month, you will have paid an average of TL 6 for each visit throughout the year."

Stressing that they have created such a protection shield for Turkish visitors, the minister said that TL 6 is very low for foreign visitors, and museum card prices must be raised by 50 percent, considering that museum entrance prices in Turkey are quite low on a foreign exchange basis compared to those in other countries. According to the minister, this hike is needed since most museum visitors are foreigners, and the current museum card price leads to a decline in tourism revenue, which is used to maintain, repair and clean museums.