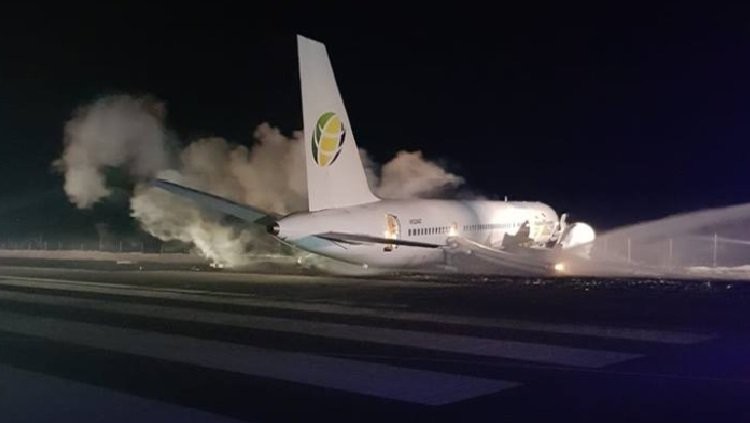 Airline spokesman Carl Bowen said the plane, which was on its way to Toronto, reported a hydraulic failure emergency shortly after taking off from the Cheddi Jagan International Airport and returned after less than 20 minutes.

Bowen said 120 passengers and crew were on the plane. When it landed, the crew was unable to stop the aircraft, which came to a halt at the northeastern takeoff end of the runway, badly damaging its right wing and engine.

The plane had 118 passengers, two infants and eight crew members on board. Six passengers suffered nonlife-threatening injuries when the plane landed about 45 minutes after it departed Cheddi Jagan International Airport at about 2 a.m. local time (0600 GMT), hesaid.

"We can confirm that flight OJ256 bound for Toronto has returned to Georgetown with a technical problem and has suffered an accident on landing," Fly Jamaica said in a statement.

The airline said it was providing local assistance.

The Guyana Civil Aviation Authority is leading an investigation and the U.S. National Transportation Safety Board, which automatically assists with inquiries under international rules, was notified, officials said.

Boeing Co is looking into the incident, a spokesman said.

Last week, Indonesian airliner Lion Air flight JT610, an almost new Boeing 737 MAX 8, crashed into the sea soon after taking off from Jakarta, killing all 189 people on board..

In July 2011, a Boeing 737-800 aircraft belonging to Trinidad-based Caribbean Airlines crashed at the same airport after landing too far down the runway and running out of braking space, injuring several people. The runway then was 7,400 feet (2,255 meters) but is currently being extended to 10,000 feet.