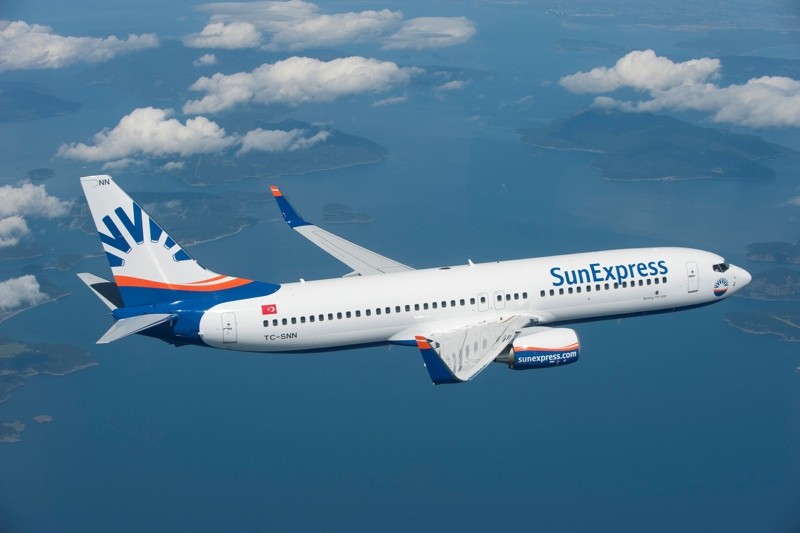 Turkish-German carrier SunExpress will offer a record high capacity of 6.4 million seats in its international flights for summer 2019.

In addition to increasing its seats by 30 percent, The airlines will also significantly expand its flight frequencies between Turkey and Europe, it said in a statement.

Antalya-based SunExpress was founded as a joint venture of Turkish Airlines and Germany's Lufthansa in 1989. The carrier flies to 90 destinations in more than 30 countries.

SunExpress CEO Jens Bischof said that the company will operate direct flights from 16 points in Turkey to 36 destinations in Europe with adding new routes in the upcoming summer.

"After SunExpress was even building up capacity to Antalya and Izmir in the difficult years where other airlines shifted their capacity to non-Turkish destinations we will now continue to support Turkish tourism to get back to record braking numbers in 2019. Voted as the World's 5th best leisure airline and the best leisure airline in Turkey by Skytrax, which is known as the choice of passengers, SunExpress' will continue to be the trusted airline link to the touristic destinations of Turkey", Bischof said.

He remarked that the carrier offered 5 million seats to the touristic regions of Turkey last summer season.

"We will now continue to support Turkish tourism to get back to record breaking numbers in 2019," said Bischof.

As the airline offering the most direct flights from Antalya, known as Turkey's tourism capital, SunExpress will launch four new routes to Oslo in Norway, Gothenburg in Sweden, Eindhoven in the Netherlands and Prague in Czech Republic.

From Izmir, where the company uses as its second hub, SunExpress will be offering three new routes to Eindhoven in the Netherlands, St. Petersburg in Russia and Marseille in France.

The statement also said that the company will also start connecting Dalaman and Bodrum to Europe by March 2019.

The carrier will add new destinations to its flight network as direct scheduled flights to Anatolia, which is the fastest growing market of SunExpress. Düsseldorf-Malatya, Düsseldorf-Kütahya/Zafer, Köln-Samsun, Stuttgart-Diyarbakır, Stuttgart-Konya and Oslo-Konya will be the new direct flights.

"As SunExpress, we have roots in both Turkey and Germany. Especially Turkish customers living in Europe are very important to us. By adding a significant number of flights to Anatolian destinations in the summer of 2019 we continue to be the strongest direct link between Germany/Europe and Anatolia. Compared to last summer, we will offer 30 percent or almost 1 million seats more to this beautiful part of Turkey," SunExpress CEO Bischof said.