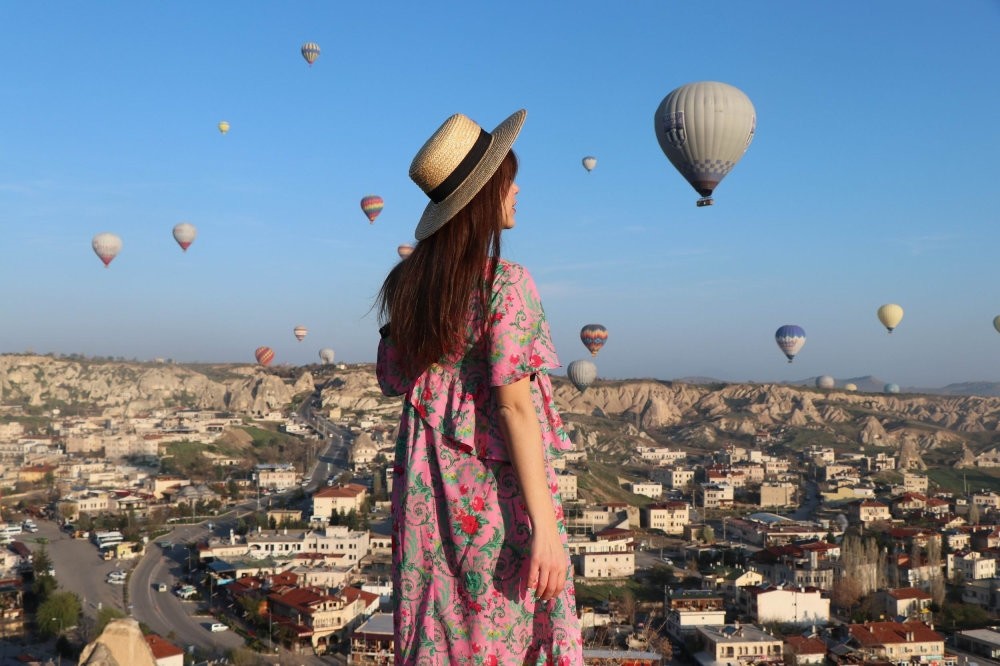 Turkey welcomed around 41 million visitors, including Turkish citizens residing abroad, in the first ten months of this year.
by Daily Sabah with AA Dec 15, 2018 12:00 am

The tourism sector has experienced a "golden" period this year, overcoming the difficulties seen in previous years, and is very close to ending 2018 with a record number of over 40 million foreign tourists. The industry, which has realized major achievements so far this year, is projected to rise to the world league in 2019 with new structures and policy. Having closed 2017, which stood out as a year of recovery following a difficult period in 2016, with 32.4 million foreign visitors and $26.3 billion in tourism income with an increase of 28 and 19 percent, respectively, compared to the previous year, the sector experienced its golden period this year.

The rapid upward trend in tourism has been quite evident since the first months of the year.

According to the data announced by the Culture and Tourism Ministry every month in line with the border entry-exit statistics submitted by the General Directorate of Security, Turkey broke the all-time record in the first quarter, hosting 5.1 million foreign visitors with an increase of 34.88 percent.

During this period, most visitors came from Iran, Georgia, Germany, Bulgaria and Russia, and the overnight stay rate in hotels and accommodation facilities increased by 22 percent. In the summer months, hotels in the tourism regions reached 100 percent occupancy rates.

Tourism revenue in the first six months amounted to approximately $11.5 billion with an increase of 31 percent year-on-year. In this period, 16 million foreign visitors were welcomed with a record increase of 30.4 percent compared to last year.

As for the January-August period, approximately 27 million foreign visitors came to Turkey with an increase of 22.92 percent compared to the same period of the previous year. Russia, Germany and the United Kingdom led the way in the number of tourists in the eight-month period, while the cities where foreigners entered most were Istanbul, Antalya and Edirne, in that order.

In the third quarter of the year, covering the nine-month period, Turkey was visited by 32 million foreigners, seeing an increase of 22.08 percent compared to the same period last year.

In the January-September period, tourism revenue increased by 13 percent compared to the same period of the previous year, reaching $22.97 billion.

According to ministry data, Turkey hosted more than 41 million visitors, including Turkish citizens residing abroad, in the first 10 months, exceeding the 40 million threshold this year.

In terms of foreign visitors alone, in 10 months, 35.6 million tourists arrived with an increase of 22.43 percent compared to the same period of the previous year.

According to Turkish Statistical Institute (TurkStat) data, the income Turkey generated from health tourism has been recorded as $4.4 billion over the last five years.

According to the forecasts of the ministry and sector representatives in light of available data, it is expected that the number of foreign visitors will exceed 40 million by year-end, and tourism revenues are expected to reach $32 billion in the meantime.

TOURISM TO LEAP FORWARD NEXT YEAR

Policies carried out in tourism will be renewed from scratch starting next year.

Under the instructions of Culture and Tourism Minister Mehmet Nuri Ersoy, a new road map will be put into practice where Turkey's cultural, archaeological and natural beauty will be highlighted 12 months of the year and Far Eastern countries will be focused on as countries to attract tourists from; the country's promotion strategy will be prepared anew as well.

In this context, special tourism plans will be prepared for the Far East, which includes China, India, Japan and South Korea, and an action plan for gastronomy tourism will be formed.

The focus of these studies will be to increase the arrival of high-income tourists in Turkey and their tourism revenues.

The ministry, which has given the green light for the establishment of the Tourism Development Fund of Turkey that will serve as a pioneer not only in publicity but also in investment, will work on legislative arrangements related to the fund, which is soon to be on the agenda of the Assembly.

In the new ongoing promotion strategy of the country, a wide range of public relations studies will be conducted with opinion leaders or bloggers and people with a high number of followers on social media.

With the international advertising tender that will be launched in January, the ministry will change its logo, which has been shaped around the "Turkey Home" campaign and the "tulip" figure that has been in use for 18 years.

In addition, seven regions with concentrated tourism, including Diyarbakır, will be established through the ministry and the Tourism Development Fund to be established in this scope.

Through the Direct Tourism Mobility program initiated in cooperation with national flag carrier Turkish Airlines (THY), business flights will be launched to Antalya, Bodrum, Dalaman and Izmir airports on 13 routes with 67 flights as of April 2019, and the number of flights wil l be increased to 143 in the next five years.