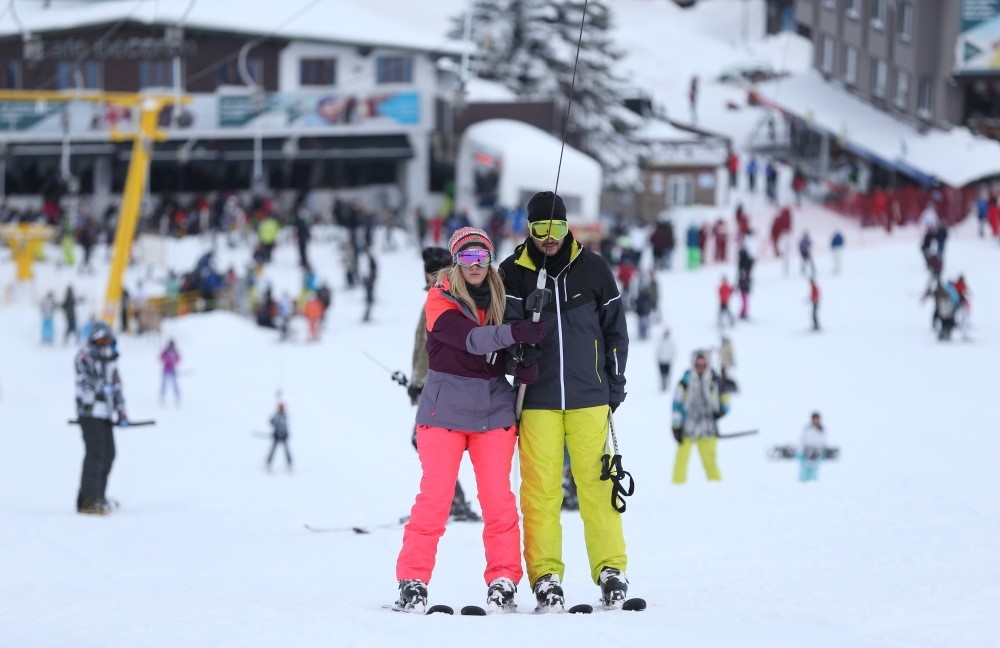 With the skiing season open, Uludağ, one of Turkey's leading winter tourism centers, has recently been more active compared to the last couple of years, with a stream of visitors and overnight tourists.

The hotels in the area have reached 100 percent occupancy, much to the liking of hotel operators and businessmen.

Uludağ offers various hotel accommodation options. It is 40 kilometers away from Bursa city center by car or 9 kilometers by cable car. It has 6,500-bed capacity guesthouses, which were almost entirely full past weekend due to by New Year's celebrations.

Holidaymakers can enjoy various activities, including skiing, snowboarding, sliding and snow bikes at the facility, which has 20 ski tracks with a total length of 300,980 meters.

Uludağ Tourism Development Cooperative Chairman Beytullah Maviçiçek told Anadolu Agency (AA) that tradesmen and operators in Uludağ are pleased with the current developments. "The season is going well compared to a few years ago. There are more tourists than we expected," he added.

Maviçiçek said that they are trying to fix the prices for different products at Uludağ. He added that some practices carried out by the Uludağ National Parks Directorate and the gendarmerie reduced informal economic activities.

"Uludağ has regained its confidence. The prices are not as high as before. We adjusted them. People are pleased with Uludağ, and they enjoy the activity, adventure and excitement. Uludağ has begun to regain its former glory," he added, saying that they have welcomed a great number of tourists so far. "We did not expect so many tourists. In the last few years, Uludağ's vision has begun to change. We hosted many guests on the New Year's Eve."

Official figures show that Turkey welcomed more than 37.5 million foreigners in the first 11 months of 2018, up 23 percent year-on-year.

Once the figures for December are released, the country is expected to have surpassed 40 million foreign visitors, an all-time high.

The country closed 2017, a year of recovery following a difficult period in 2016, with 32.4 million foreign visitors and $26.3 billion in tourism income, an increase of 28 percent and 19 percent, respectively.

Selim Adıyaman, who operates a ski resort in the First Hotels Region, said that the season was going very well and that they were hopeful about the semester break, stressing that they kept prices fixed for 2-3 years to make sure everyone could ski.

Ski and snowboard operator and trainer Taner Üstündağ said that the snow level in Uludağ was good. "Holidaymakers who love winter tourism showed great interest in Uludağ. The New Year's Eve was quite busy. Every year the number of ski lovers increases in our country. We are happy with the current momentum," he said.

Nusret Santur, a sled operator in Uludağ, said that he has been doing this job for 18 years. Pointing out that they are very satisfied with the New Year's holiday, Santur said snowfall is going well, and there is no obstacle to sliding.

Tugay Uyanık, who has been selling corn and chestnuts in the Sarılan region for seven or eight years at the same spot, said Uludağ has a unique beauty in summer and winter. "We made a good start in the season," he said, adding that he has started to sell meatball sandwiches, fries, corn and chestnuts to local and foreign guests.

Gülşah Büyükbuke, owner of a food establishment in the Second Hotels Region, said that sales have doubled compared to last year. "There are more visitors and tourists. Snowfall is also very nice. We have been selling sausage sandwiches for TL 30 for two years. We do not raise our prices to offer good service and accommodate our guests well," she said.