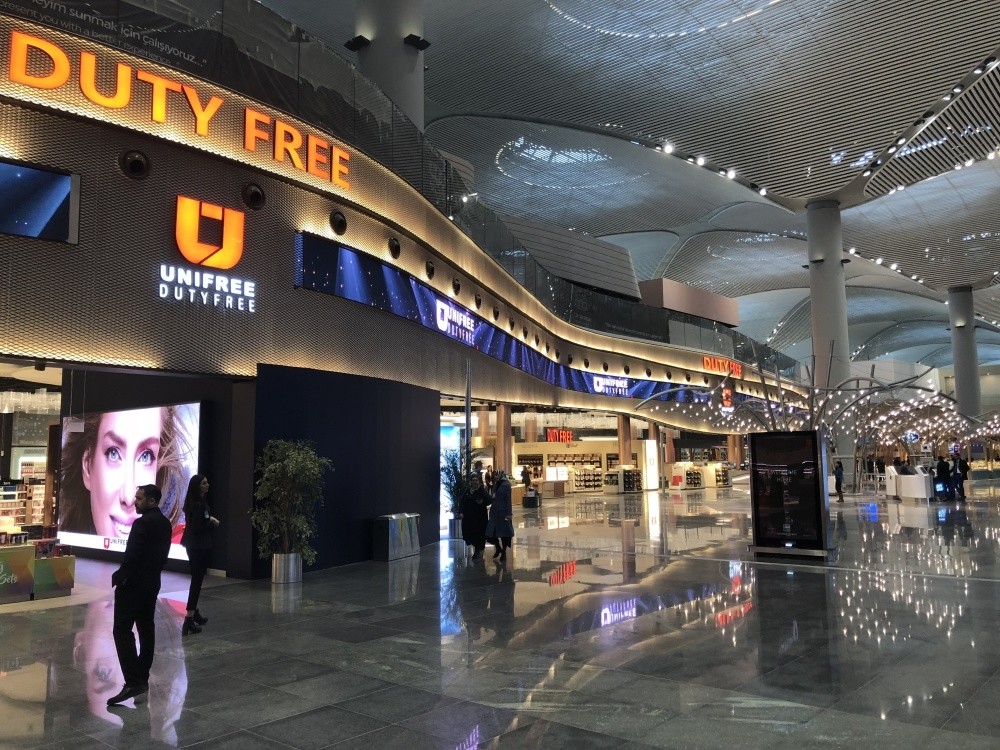 Around 1,000 domestic and international brands are being brought together under one roof at one of the world's largest duty-free areas at Istanbul Airport.
by Alen Lepan Jan 16, 2019 12:00 am

Apart from offering a great flying experience, Istanbul Airport will also enable travelers to have a one-of-a-kind shopping experience at one of the world's largest duty-free areas, whose second phase was inaugurated Tuesday

Right after passing through passport control for international departure, passengers at Istanbul Airport will be greeted by globally known brands at one of the world's largest duty-free shopping complexes.

Besides for being a new center of international aviation, the grand airport will, with its exclusive shop concepts for luxury, fashion and lifestyle brands, offer a one-of-a-kind shopping experience for the travelers.

The second phase of the duty-free area at the airport was inaugurated Tuesday. Five new grand stores in an area of 8,000 square meters were put into operation.

The first store at Istanbul Airport was opened along with the opening of the first phase of the airport, carried out on Oct. 29, on the 95th anniversary of the founding of the Republic of Turkey.

The airport has the potential to welcome 90 million passengers annually and following the second phase of construction, expected to be completed in 2023, this number will reach around 200 million.

Domestic and world-renowned brands and stores will be available for 90 million visitors in the 53,000-square-meter area under the partnership of Heinemann, the world's largest duty-free operator, and Unifree.

Launched with an investment of TL 1.2 billion, half of which is equity capital, the duty free will be creating jobs for nearly 3,000 people. The area, inspired by the Bosporus in its design, is the size of nine football fields.

Unifree, which signed a 25-year agreement with Istanbul Grand Airport Operation (IGA) to operate duty-free shops, is bringing around 1,000 domestic and international luxury brands under one roof at one of the world's largest travel retail areas.

"We are happy to be realizing another important step on this trip we began with an aim of making Istanbul the world's aviation center," said Kadri Samsunlu, CEO of IGA, the contractor and operator of the airport, in his speech at the opening ceremony, calling the duty-free area the soul of Istanbul Airport.

Samsunlu said Istanbul Airport will not only be providing services but will be introducing "our country and most importantly Istanbul." "We are pleased to bring together strong brands from around the world and our country with people from across the globe in our commercial areas." Unifree CEO Ali Şehner, on the other hand, stressed that with the size of the area, many important brands from Turkey and abroad, and the concepts they have developed, they have launched a project that will make tremendous impact around the world and created a duty-free area that suits Istanbul Airport.

One of the two largest flagship stores was also launched within the scope of second phase of the duty-free area, consisting of stores in different concepts ranging between 4,200 and 28 square meters.

Many of the world-famous brands will be producing and offering products exclusively for Istanbul Airport. There will be many firsts in the field of technology as well.

Pushing the limits of a classic duty-free concept, Unifree will be providing passengers with an opportunity to experience the latest innovations in technology before anyone else, while also providing access to design products.

In the field of technology, products of the world's leading brands that create trends will be exhibited in specially designed concept stores.

Cosmetics brand Christian Dior, a parent company of LVMH, one of the biggest luxury brand groups in Europe, has reportedly come to an agreement after long-standing negotiations and will open its store in May. In addition, Louis Vuitton, another member of the LVMH group, French luxury giant Hermes and Qatari Mosafer will also open stores at the airport.