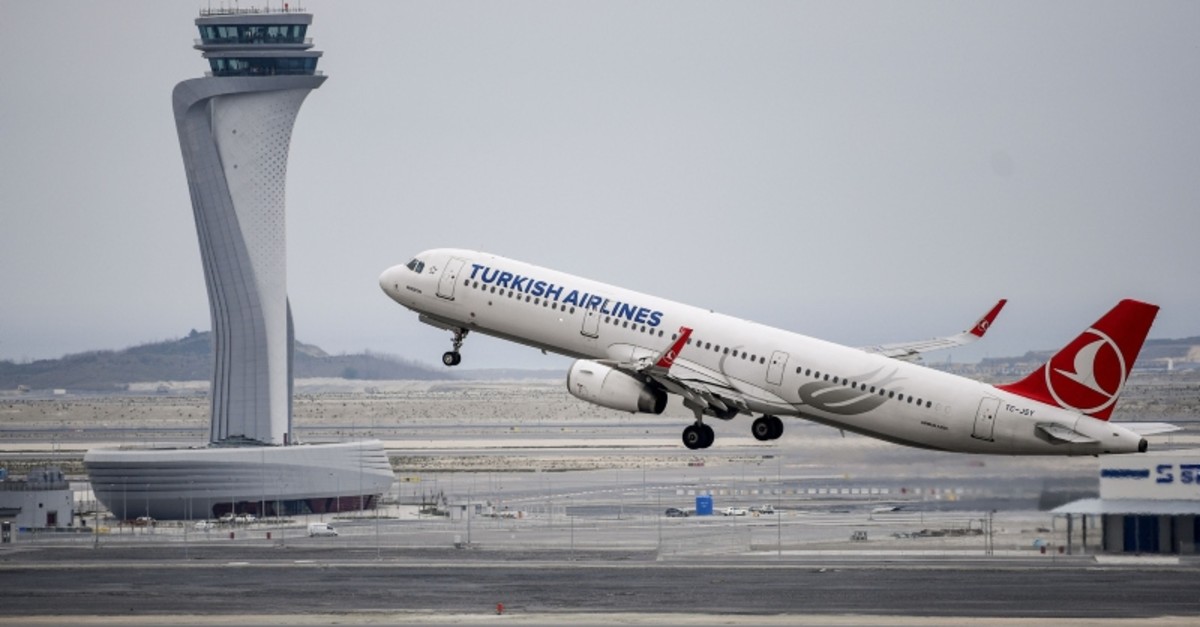 A Turkish Airlines plane takes off in front of the control tower at Istanbul Airport on the first day after moving from Ataturk International airport on April 6, 2019 in Istanbul. (AFP Photo)
by daily sabah Apr 07, 2019 3:31 pm

Turkey's national flag carrier Turkish Airlines (THY) carried more than 25,000 passengers on its first day at its new home, after completing its "great move" from Atatürk Airport to Istanbul Airport.

"As of 1:45 a.m. we said farewell to 10,641 guests in our 48 flights. The number for arriving passengers stood at 14,582 in 79 flights. We handled 21,792 pieces of luggage and achieved 84% performance rate. We are off to a good start and doing well," THY's Senior Vice President of Media Relations Yahya Üstün said on Twitter on Sunday.

The world of civil aviation witnessed the greatest logistical operation in its history with THY's move to its new home and the new aviation center of the world: Istanbul Airport. The operation, dubbed "great move" started while Istanbulites enjoyed their sleep at 3 a.m. on Friday morning.

According to Üstün, the move was 94% complete by 8 a.m. on Saturday.

THY bid farewell to Atatürk Airport with the last international flight to Singapore that departed on Saturday at 2 a.m. The first THY aircraft took off to the Turkish capital Ankara at 2:00 p.m. from its new home at Istanbul Airport. In the 12-hour period between the two flights, both airports were closed for any flight operations. The flights at the new aviation hub Istanbul Airport will be increased incrementally.

Atatürk Airport, which was commissioned in 1953, no longer serves commercial flights as of Saturday. The airport, which handled 68 million people last year, will transition to other uses, such as training activities, aviation fairs and civil use.

THY Chairman İlker Aycı said in a statement Friday: "We are carrying out the greatest logistical operation in world aviation history. The operation is not only closely followed by the Turkish public, but also by the global aviation community. Once our movement is complete, we will continue to host our guests from all around the world, offering them the unprecedented service of Turkish Airlines."

Trucks carried equipment a distance of 400,000 kilometers in 45 hours, traveling an equivalent of going 10 times around the world. Over 1,800 personnel were employed during the operation.

The load consists of over 10,000 pieces of equipment, from an aircraft-towing apparatus weighing 44 tons to extremely sensitive materials and is equivalent to a 5,000-truck volume.

In over four months, since the first flight on Oct. 31 until March 18, Istanbul Airport hosted a total of 2,902 flights, including 1,671 domestic and 1,231 international flights. A total of 372,118 passengers, including 226,040 domestic passengers and 146,078 international passengers used the airport in the said period. Istanbul Airport will provide access to 41 countries with three-hour flights, and to 66 countries with five-hour flights. One-third of the world's population will be able to reach any destination in the world by using this airport.

Established in 1933, THY flies to more than 300 destinations in over 120 countries - 49 domestic and 257 international. Last year, it carried more than 75 million passengers with a seat occupancy rate of 82 percent.