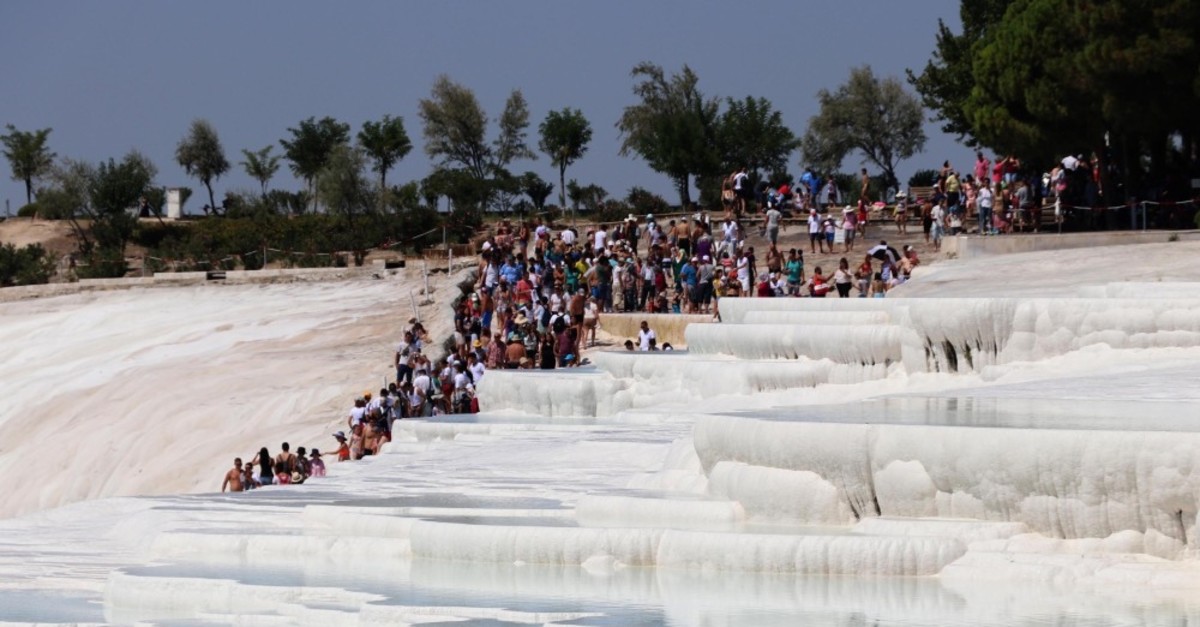 Turkey welcomed around 39.5 million foreign visitors last year and expects this figure to increase to 50 million by the end of this year.
by Daily Sabah with AA Apr 16, 2019 12:20 am

Turkish tourism professionals, citing the robust infrastructure of Turkish facilities, aim to diversify tourism areas including in health care, culture, congress and sports in order to raise revenue and boost Turkey's reputation as the number one destination for all kinds of tourism

Having hosted 39.5 million foreign visitors in 2018 with rising momentum in tourism and generating $29.5 billion in revenue, Turkey expects 50 million tourists this year by taking advantage of its competitive power in alternative tourism areas such as health, congresses, golf and fairs. Given its strong infrastructure ready to accommodate more visitors, the country aims to increase revenues by expanding in tourism areas, without limiting summer tourism.

Turkish Hoteliers Federation (TÜROFED) head Osman Ayık stated that tourism in Turkey is not just about sea, sand and sun, adding that they are looking into promoting alternative tourism in the best way possible for the country.

Expressing that congress tourism has reached significant figures in various cities of the country, with Istanbul and Antalya taking the lead, Ayık said Turkey is one of the most important centers of congress tourism in the world in an interview with Anadolu Agency (AA).

Indicating that Turkish Airlines (THY) has played an active role in this area, Ayık stressed that THY has a structure that connects the world. Emphasizing that Turkey has the airline company offering flights to the greatest number of destinations in the world, Ayık added: "One of our weapons in the tourism industry is congress tourism. We can easily organize any kind of international congress in any cities in Turkey, and particularly in Istanbul. We are highly competitive in this area as well."

Ayık further noted that Turkey has gained significant momentum in the field of treatment and cosmetic surgery.

Highlighting that systems that provide care in health tourism should be further developed, Ayık remarked: "We believe that if we turn toward certain investments and areas that will respond to the wishes of the elderly in Europe to spend their lives in the temperate climate in Turkey, we will create very serious potential in this area as well. As Turkey and Antalya, we are present in all areas of tourism. We have a strong infrastructure and can use it very easily in any field."

Association of Mediterranean Tourist Hoteliers and Operators (AKTOB) Chairman Erkan Yağcı said tourists from around the world come to Turkey for holidays.

Underlining that diversity is important in tourism, Yağcı said the tourism industry has grown based on the "all-inclusive" model. Stressing that Turkish tourism has been very successful in this area, Yağcı continued that Turkey is one of the countries in the world to have implemented this system in the best way. Yağcı further iterated that Turkey has to diversify tourism to achieve its goal of attracting 70 million tourists, adding, "We need to develop culture, sports and health tourism models in addition to sea, sand and sun tourism."

Highlighting that Antalya has demonstrated itself in terms of tourism diversity, Yağcı explained that the city has evoked the admiration of guests arriving regarding golf tourism.

He also touched on the conversation he held with former U.S. President Barack Obama last week, saying: "When I mentioned Antalya to Barack Obama, the 44th President of the U.S., who was one of the main speakers at the international tourism summit that I last attended abroad, he told me that 'your golf courses and golf are very nice.' I understood that we had left a mark. The potential of Antalya is very high at this point. We believe that it will offer many different riches in tourism diversity as well. So, we see that Antalya has tourism potential of not 13 million to 14 million tourists but can actually exceed 20 million."