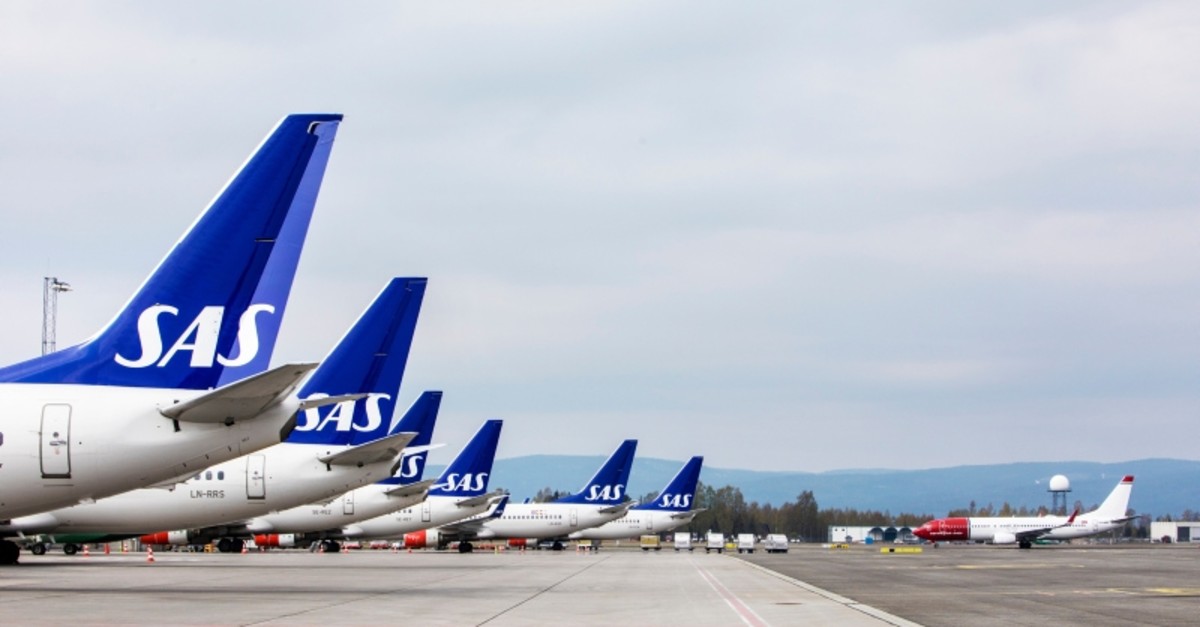 SAS planes are seen grounded at Oslo Gardermoen airport during pilots strikes, in Oslo, Friday, April 26, 2019. (AP Photo)
by Apr 28, 2019 2:17 pm
Scandinavian airline SAS canceled more than 1,200 flights scheduled for Monday and Tuesday as a pilot strike that has disrupted the travel plans of hundreds of thousands of passengers entered its third day on Sunday.

SAS pilots went out on strike on Friday as wage talks broke down, grounding around 70 percent of the airline's flights and impacting about 280,000 passengers including the latest cancellations.

"We deeply regret that our customers are affected by the ongoing pilot strike when SAS now cancels flights on Monday and Tuesday," the airline said in a statement.

"The strike will affect an additional 61,000 passengers on Monday when 667 flights are canceled across Scandinavia. On Tuesday 49,000 passengers and 546 departures will be affected."

The deadlock in the dispute showed no sign of being broken early on Sunday with both SAS, Swedish and Danish pilots unions and Norway's employers association NHO saying no renewed contacts between the parties had been initiated.

The carrier created after World War 2, which remains part-owned by the Swedish and Danish governments, has said it was prepared to return to negotiations but warned that agreeing to pilots' demands would seriously damage the company.

The airline industry's employer body in Sweden has said pilots sought a 13 percent wage hike despite what it called already high average wages of 93,000 Swedish crowns ($9,777) a month, demands it labeled as "extreme".

The SAS Pilot Group, a union body representing 95 percent of the airline's pilots in Denmark, Norway and Sweden, has said the dispute concerns more than wages, pointing to demands for more predictable working hours.

Having flirted with bankruptcy in 2012, SAS has run a net profit in each of the last four years. But rising fuel costs, volatile currencies and overcapacity among European airlines has put pressure on carriers, including SAS.

Sydbank analysts have estimated the strike costs the airline 60-80 million Swedish crowns per day, a rate which would wipe out the expected net profit this year in just two weeks.

The strike at SAS does not affect flights operated by its partners, which make up roughly 30 percent of all departures.