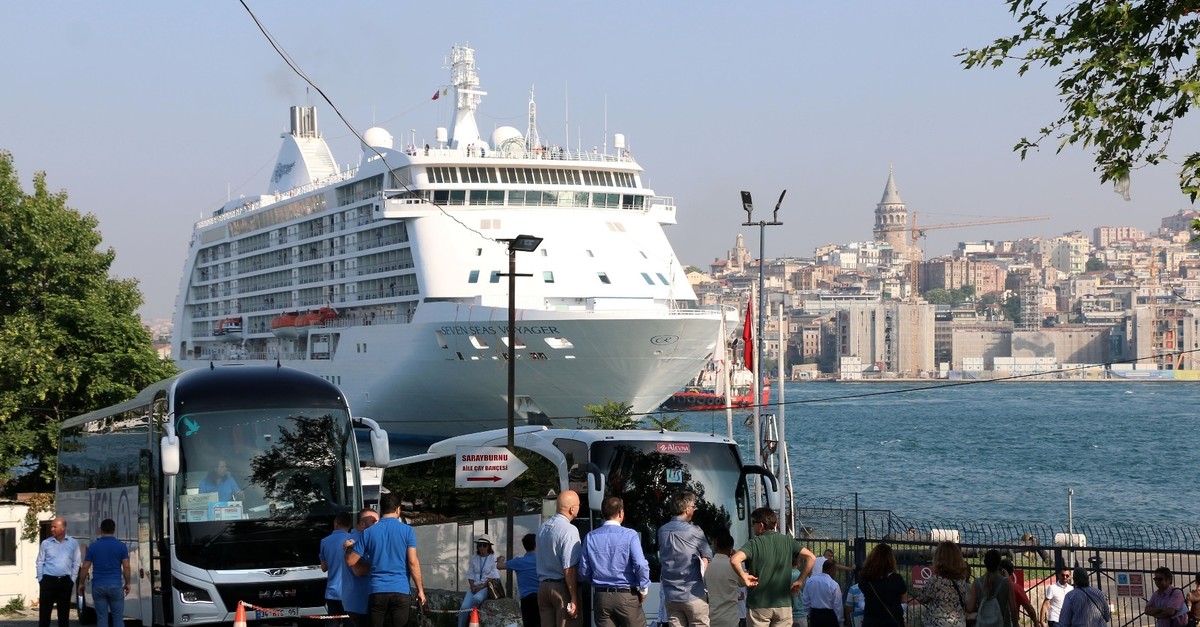 Istanbul welcomed its first cruise ship in four years as the 10-story Regent Seven Seas Voyager, carrying 750 passengers, docked at the city's Sarayburnu Port this week. The cruise ship was welcomed by an Ottoman Janissary (Mehter) band. "The arrival of a [cruise] ship in a world-renowned city like Istanbul for the first time in four years is a source of happiness for us," Karaköy Port Local Authority and Deputy Governor Mehmet Kalyoncu said. The Regent Seven Seas Voyager, mostly carrying tourists from Italy and Greece, arrived at Sarayburnu at 8:30 a.m.

A welcoming ceremony was held for the luxury vessel. Karaköy Port Local Authority and Deputy Governor Kalyoncu headed the delegation that welcomed the cruise ship."We have just met the captain who is also pleased to be here. The passengers of the ship will visit Istanbul's historical sites. We have taken all kinds of security measures in accordance with the instructions of our governor. It will give us happiness that the passengers, who will stay here for two days, happily return home and more cruise ships arrive [in Istanbul]."

Ayça Kesici, a tour guide who came from İzmir to support the guides in Istanbul, said they were all very excited. "We have long waited for this day. Tourism operators consider this as the beginning. We believe and hope that it will continue," she said.

"People want to go to countries where they feel safe, peaceful and happy," Kesici said, adding that this ship's arrival in Istanbul will improve the perception of the city, its stability and trust.

Kesici, who has been following the ship tourism closely, said these ships with at least 3,000 to 4,000 people on board are very important for Istanbul. "They contribute to the history and tourism of Istanbul. For the first time in years, a ship dropped anchor and was greeted with a ceremony. Hopefully, larger ships will come with the completion of Galataport," she added.

Cruise tourism in Istanbul which had come to a standstill in the last four years has started to rebound this year. Some 24 cruise ships were expected to arrive in the city by October and the number is expected to reach 80 in 2020.

A new cruise port is in the plans at Istanbul's Yenikapı district and the tender bidding is likely to take place by the end of this year.

In addition, Istanbul's mega-port project Galataport, which is currently under construction, is expected to revive the city's cruise tourism sector.

The Culture and Tourism Ministry forecast that the port will host around 500 cruise ships with an average of 4,000 passengers each. With these ongoing and planned projects, Istanbul is expected to become one of the major cruise centers in the Mediterranean region.