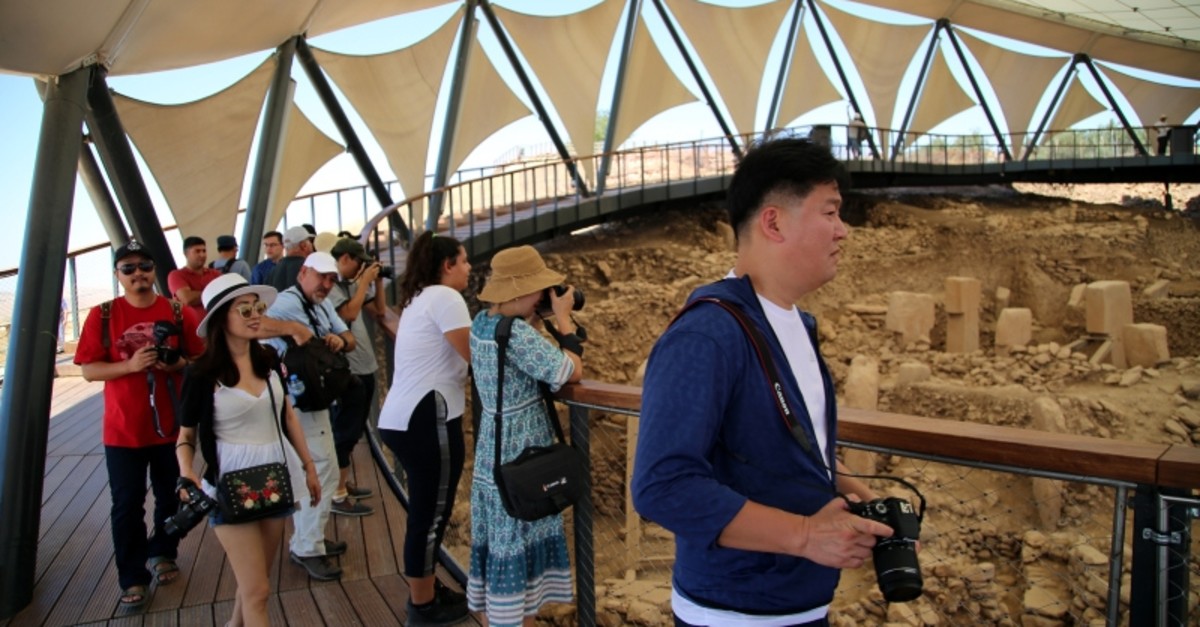 With its rich culture and unique natural landscapes, Turkey is becoming an increasingly popular destination for Asian tourists, and particularly for South Koreans, who have deep-rooted bonds with the Turkish people.

Turkey has seen more than a 40% rise in the number of South Korean visitors in the first five months of this year, compared to the same period in 2018.

According to Culture and Tourism Ministry figures, nearly 84,000 South Koreans came to the country from January to May, up sharply from some 59,000 in the same period of last year.

Like Turkey's other famous tourist attractions, Istanbul's historic district of Sultanahmet -- home to the renowned Hagia Sophia Museum, Topkapı Palace, and Blue Mosque -- is thronging with groups of Korean travelers from early in the day.

Cappadocia, the charming touristic hub in central Turkey famed for its fairy chimneys, the ancient city of Ephesus in the Aegean Izmir province, the holiday resort of Antalya, and Pamukkale, known for its mineral-rich thermal waters and white travertine terraces, are also seeing large numbers of Korean visitors, especially in spring and summer.

"They choose to come to Turkey as they wonder at the history and culture of Turkey. They like Turkey, as we are brotherly countries," he added.

Se Man, who also lives in Istanbul, praised Turkey's hospitality, a quality that puts tourists at ease while traveling.

Korkut Aydın of Istanbul-based Blue Bosporus Tours also thinks the number of the Koreans coming to Turkey this year has spiked.

"Everyone [in the sector] feels this increase. We think that it will rise even more in the coming days," said Aydın.

Pointing to Turkey's cultural diversity, Aydın said, "From the Aegean to the Mediterranean and to the country's southeast, Turkey is a very rich country in terms of culture and history, which they [Koreans] like."

Due to security concerns, not as many Asians were visiting Turkey, said Idris Akkuş, sales manager at a souvenir shop in Sultanahmet.

But those days are past, he said.

"When they see Turkey is a safe country, in recent years they started to come visit," Akkuş noted.

There are also other reasons why Koreans like Turkey, Adrian Hong, 39, a South Korean tourist guide, told Anadolu Agency.

While touring the historic Sultanahmet district with his tour group, Hong pointed out Turkey's importance for Christians and the history of the faith.

"Koreans want to see the important faith-based sites. This is one of the reasons they visit."

Besides Istanbul, many Christians visit Ephesus in the Aegean Izmir province, home to the House of the Virgin Mary, where the mother of Jesus spent the last years of her life, according to some beliefs, as well as Antakya (ancient Antioch), where St. Paul was a missionary.

"The other reason is deep-rooted bonds," Hong explained. "Turkey and Korea are brotherly countries. That's why they choose to come here."

"I was surprised by what I saw here," Lee Doo-Ki, a tourist and professor of industrial management, told Anadolu Agency in Istanbul.

Touring around the fabled city, Lee said, "There are historic buildings, beautiful streets here in Istanbul. It's impressive."

Coming from the capital Seoul, Yj said of the city -- which famously straddles two continents -- "It is very similar and different from European countries. It's a mixture of Asia and Europe."

She also said that she was planning to visit Cappadocia, a destination recommended by many tourists and locals alike.

"Koreans initially think that there's terrorism here in Turkey but when they get here, their ideas change," said Hong, the tour guide.

"It's a very free country. They compare Turkey to Europe."

Tourism officials believe the number of tourists coming from South Korea as well as China, Japan, and other Asian countries will grow in the years to come.

"South Korea is a country of some 50 million people. There are around 5 million golf players in the country. Turkey can be a good golf and culture destination for them," said Osman Ayık, head of the Turkish Hoteliers Federation (TUROFED).

Saying attracting 400,000 tourists is setting the bar too low, he explained: "We need to talk about millions."

"We expect this potential will grow in the coming years," Ahmet Gazi Ulusoy, a tourist guide leading an Asian group, told Anadolu Agency.

"People who visit Turkey are returning to their home countries after falling in love with Istanbul, Cappadocia, and Pamukkale," said Aydın, the tourism company official.

Visitors who get just one taste of what Turkey has to offer will definitely want to take a return trip, said Hong, the tour guide.