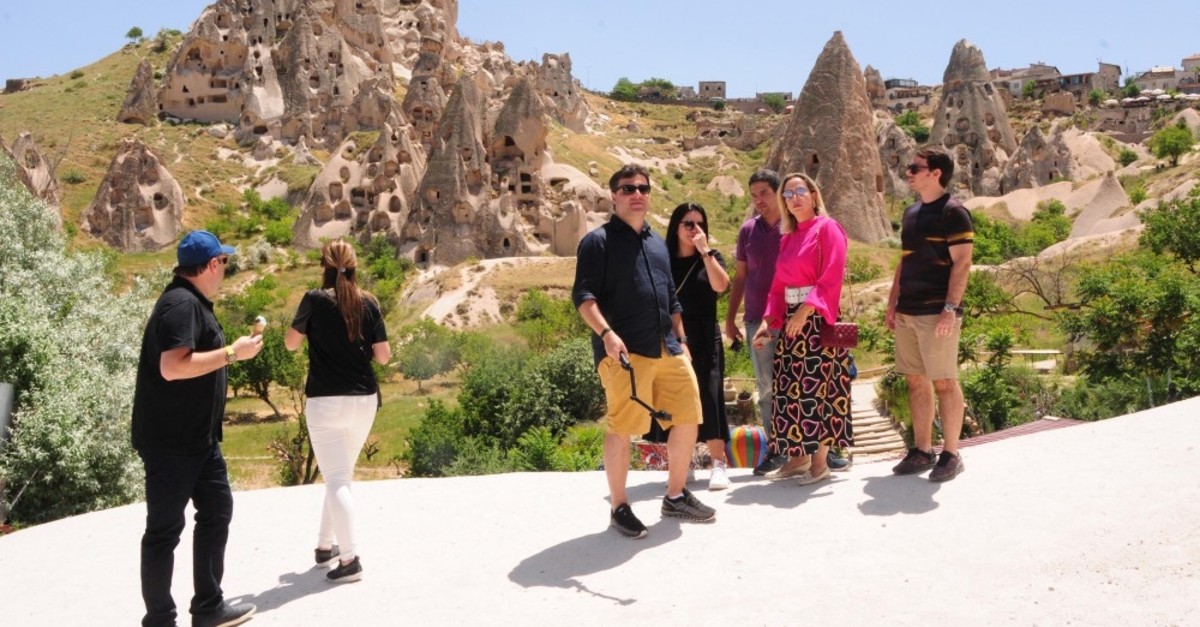 Tourists in Cappadocia, one of the Turkey's top tourist destinations.
by Daily Sabah with AA Oct 01, 2019 12:10 am

Russians topped the list among foreign tourists in the January-August period of the current year with over 4.8 million, with Mediterranean holiday resort Antalya being the top destination for visitors

Turke welcomed more than 31 million foreign visitors during the first eight months of this year, according to new data released by the Culture and Tourism Ministry Monday. The number of foreigners visiting the country soared 14.7% in the January-August period on an annual basis, according to the data. The Mediterranean resort city of Antalya was the top destination for tourists, hosting 33.3% of all visitors – around 10.3 million. The historic metropolis of Istanbul followed with 32.2% or over 9.98 million foreign visitors in the same period. Northwestern Edirne province, which borders both Bulgaria and Greece, received the third-highest number of foreigners, with 2.99 million during the first eight months. Russians accounted for 15.6% of the visitors – more than 4.8 million – followed by Germans at some 10.9% with 3.38 million visitors, and the U.K. with 5.97% at 1.85 million.

Last year, some 39.5 million foreigners entered Turkey, up from 32.4 million in 2017. According to World Tourism Organization (UNWTO) 2019 data, Turkey ranks sixth in the world in terms of the number of tourists and 14th in terms of tourism income.

Tourism is a major source of income for Turkey. Tourists in 2018 brought in some $29.5 billion, according to official data.

Outlining the details of the new strategy, Minister Ersoy said Turkey is adopting a new income and market-oriented strategy for sustainable growth in the tourism sector.

Turkey recently established the Tourism Promotion and Development Agency to promote and further develop tourism in the country. The ministry's promotion budget, which was $18 million in 2018, was increased to $72 million this year as a result of policy change. The budget with the Turkey Tourism Promotion and Development Agency is planned to be raised to $180 million over the next year and to $220 million by 2023.

On the other hand, the Hotel Association of Turkey (TÜROB) said the hotel occupancy rate was 67.3% during the first eight months of 2019, up 1.2% from the same period last year.

Occupancy in Istanbul was 73.7%, and 66.6% in Antalya during the same period, according to TUROB data.

Russians at 1.08 million and Germans at 713,527 were the top nationalities of foreign visitors in the month, followed by the British at 421,466.

During the month, Antalya, drawing 2.48 million people, was the top destination for foreigners, while Istanbul and Edirne welcomed 1.54 million and nearly 480,000 visitors, respectively.

"The UEFA Super Cup Final in Istanbul was one of the factors of this increase," TÜROB said.

The all-English final on Sept. 14 brought tens of thousands of fans from across Europe to Istanbul, while millions watched the game on TV. A delight for football lovers, the match also created economic activity for local businesses, tourism professionals and advertisers.