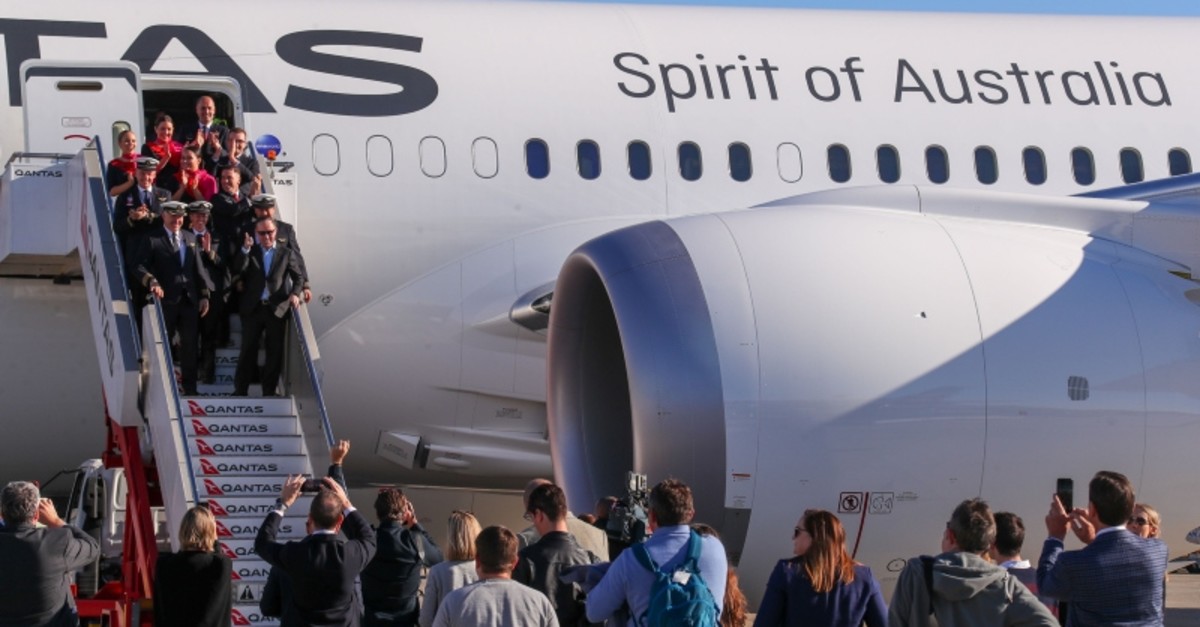 Australia's Qantas on Sunday completed the first non-stop commercial flight from New York to Sydney, which was used to run a series of tests to assess the effects of ultra long-haul flights on crew fatigue and passenger jetlag.

The Boeing 787 Dreamliner touched down in Sydney early Sunday morning after a flight of 19 hours and 16 minutes — the world's longest.

Qantas said tests ranged from monitoring pilot brain waves, melatonin levels and alertness to exercise classes for passengers. A total of 49 people were on board, in order to minimize weight and give the necessary fuel range.

"Overall, we're really happy with how the flight went and it's great to have some of the data we need to help assess turning this into a regular service," said Capt. Sean Golding, who led the four pilots.

The flight was part of Project Sunrise — Qantas' goal to operate regular, non-stop commercial flights from Australia's east coast cities of Brisbane, Sydney and Melbourne to London and New York. Two more research flights are planned as part of the project evaluations - London to Sydney in November and another New York to Sydney in December.

"We know ultra long-haul flights pose some extra challenges but that's been true every time technology has allowed us to fly farther. The research we're doing should give us better strategies for improving comfort and wellbeing along the way," said Qantas Group CEO Alan Joyce.

Night flights usually start with dinner and then lights off, but he said that for this flight, "we started with lunch and kept the lights on for the first six hours, to match the time of day at our destination. It means you start reducing the jetlag straight away."

Professor Marie Carroll from the University of Sydney said she and fellow passengers did a lot of stretching and group exercises at prescribed intervals.

Forty-nine passengers, including Qantas executives, researchers, journalists, and crew members were on the flight, which was used to run a series of experiments to assess health and well-being onboard.

"This is a really significant first for aviation," Qantas Group chief executive Alan Joyce said after arriving in Sydney.

"Hopefully, it's a preview of a regular service that will speed up how people travel from one side of the globe to the other."

Joyce said Qantas's regular, direct New York to Sydney flight, with a stopover in Los Angeles, had left three hours before the non-stop flight on Friday but had arrived only a few minutes ahead of them.

"We had a lot of interest from air traffic controllers as we crossed through different airspace because of the uniqueness of this flight," Golding said.

"We also had a special sign off and welcome home from the control towers in New York and Sydney, which you don't get every day.

"Overall, we're really happy with how the flight went and it's great to have some of the data we need to help assess turning this into regular service," Golding said.

The health researchers monitored the brain activity, melatonin levels and alertness of pilots and cabin crew, as well as six volunteer passengers, and also conducted exercise classes onboard.

As the flight was conducted on Sydney time, passengers were asked to stay awake for the first six hours of the flight to help reduce jetlag upon arrival and were served spicy food in a brightly-lit cabin.

Later, creamy, carbohydrate-heavy food was served and the lights were dimmed to simulate Sydney night-time before they arrived in the morning. No alcohol was served to the volunteer passengers to study their recovery after a long flight.

The flight came after months of flight planning to determine the optimum flight path, including monitoring daily weather and wind conditions, Qantas said.

It also said their findings on crew well-being will be shared with the Australian Civil Aviation Safety Authority to help inform regulatory requirements associated with ultra-long-haul flights over 20 hours.

Four pilots were on rotation throughout the flight, with two other pilots in the cabin. Together they had experience totaling 67,0000 flight hours.