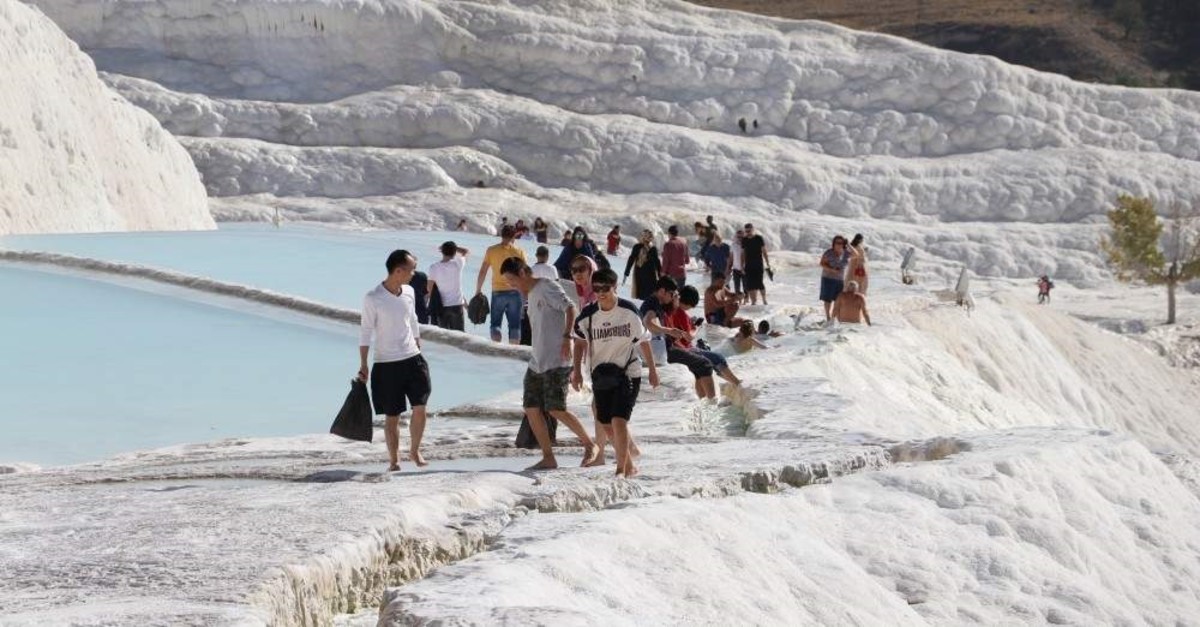 Famous for its healing waters, ancient history and travertines, Pamukkale aims to host 3 million visitors by the end of this year. (AA Photo)
by Daily Sabah with AA Nov 13, 2019 7:46 pm
Pamukkale, a region that enjoys global fame for its travertines, ancient ruins and healing waters, saw an increase in the number of visitors, with 2.3 million in a 10-month period of the year, adding another record to the ones it has broken this year. A total of 2.1 million visitors came to the region last year in the same period, according to Provincial Directorate of Culture and Tourism data.
Pamukkale in central Denizli province, was the fourth-most visited site in Turkey last year, this year it hosted 284,498 visitors in October, up 43% compared to the same month last year.
Denizli Tourist Hoteliers and Operators Association President Gazi Murat Şen told Anadolu Agency (AA) on Wednesday that Pamukkale has had the best year in terms of number of visitors.
"We aim to attract 3 million visitors by the end of the year," Şen said, adding that they will achieve this goal due to the intersession holiday of schools, he said they also want to host 5 million people in the medium term.
Underlining that 2019 has been a golden year for Pamukkale, Şen continued: “We aim to promote our country in the best way by staying above Turkey’s average. In fact, our goal is to exceed [the number of visitors] at Hagia Sophia and Topkapı Museum. We continue our efforts for everyone to see the fascinating view of the travertines."
Şen noted that tourists from Far Eastern countries as well as Russia, Germany and South America, led to intensified visitor traffic, adding that a significant number of foreign visitors participated in long-term Turkey tours – which had increased the income per tourist.
Last Update: Dec 20, 2019 1:40 am
RELATED TOPICS