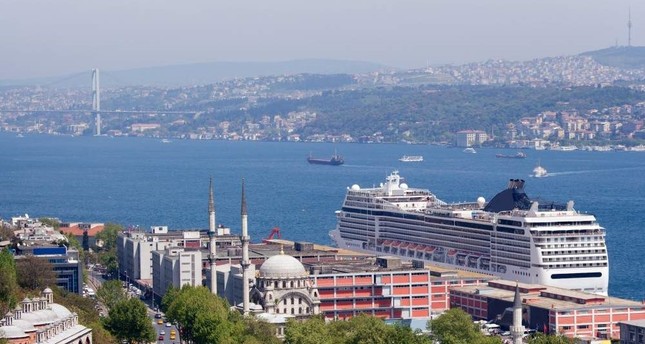 After Turkey was named the best cruise destination in the Mediterranean by the readers of the U.S.-based Porthole Cruise Magazine, Japanese company Cruise Planet decided to expand operations in the country. (?HA Photo)

Cruise Planet, a tour company owned by Japanese travel group HIS, has decided to increase its investments in Turkey after the country was declared the best cruising destination in the Mediterranean.

The U.S.-based Porthole Cruise Magazine, a top authority on the cruise industry, declared Turkey the best cruising destination in the Mediterranean thanks to a reader poll. Upon this announcement, Cruise Planet, a Japanese company that has been operating in Turkey since 2018, has decided to boost its investments in Turkey.

Cruise Planet, a subsidiary of HIS Global - a Japanese global giant celebrating its 40th year in the tourism sector, announced that the investment package would include the launch of The House of Cruising Nişantaşı in Istanbul's glamorous Nişantaşı district. The new space will operate as a cruise showroom and highlight the group's unique approach to the business.

HIS has 550 offices across 70 countries, employing around 17,000 staff. Cruise Planet Manager Onur Ovacık said that they have been managing Cruise Planet combining Japanese vision and Turkish hospitality.

Cruise ships belonging to a range of companies with an impact on the global market are scheduled to arrive in Istanbul as of 2020 and in 2021. The revival of Turkish cruise tourism, Ovacık said, has been welcomed at company headquarters in Japan: “We continue to move forward toward our goal of making Turkey a cruise capital. We have made a move to serve our brand, launched in Turkey in 2018, in The House of Cruising Nişantaşı at an unusual office with an intimate cruise showroom theme in home concept,” Ovacık said in a statement to İHA Wednesday.

“With the encouragement of our head office and the opening of our new office, we will increase our marketing budgets and work hard for the further recognition of boat tours in Turkey. Since Turkey has been designated the best cruise destination in the Mediterranean, our Turkey office has decided to conduct marketing-sales activities of Cruise Planet in countries such as Greece, Azerbaijan, Iran, Dubai and Qatar,” he further noted.

Ovacık expressed that as the first Turkish company in the sector, the group saw itself as a local cruise "search engine," stating that it would “provide round the clock services with a money-back guarantee. Our mission is to look at the range of packages we offer and, with the help of a few questions, find the ideal tour for each customer - whether first-time cruisers or seasoned travelers, we want to present our customers with the best relaxing holiday and send them on a sea-faring holiday in the hope they will pick a cruise holiday once again in the future.”

Ovacık was invited to the naming and launching ceremony of the MSC Grandiosa, the latest boat to join the fleet of MSC Cruises, Europe's largest cruise company. He received the “Best Tour Operator in Turkey” award in the cruise sector at the ceremony in Hamburg.

Istanbul on Saturday welcomed one the largest cruise ships to arrive in the city in recent years, the MSC Larica, which set sail from Venice, Italy, before docking at the city's Sarayburnu port carrying 2,000 passengers.

A new cruise port is in the making at Istanbul's Yenikapı district with tender bidding likely to take place by the end of this year. In addition, Istanbul's megaport project, Galataport, construction of which is currently underway, is also expected to revive the city's cruise tourism sector.