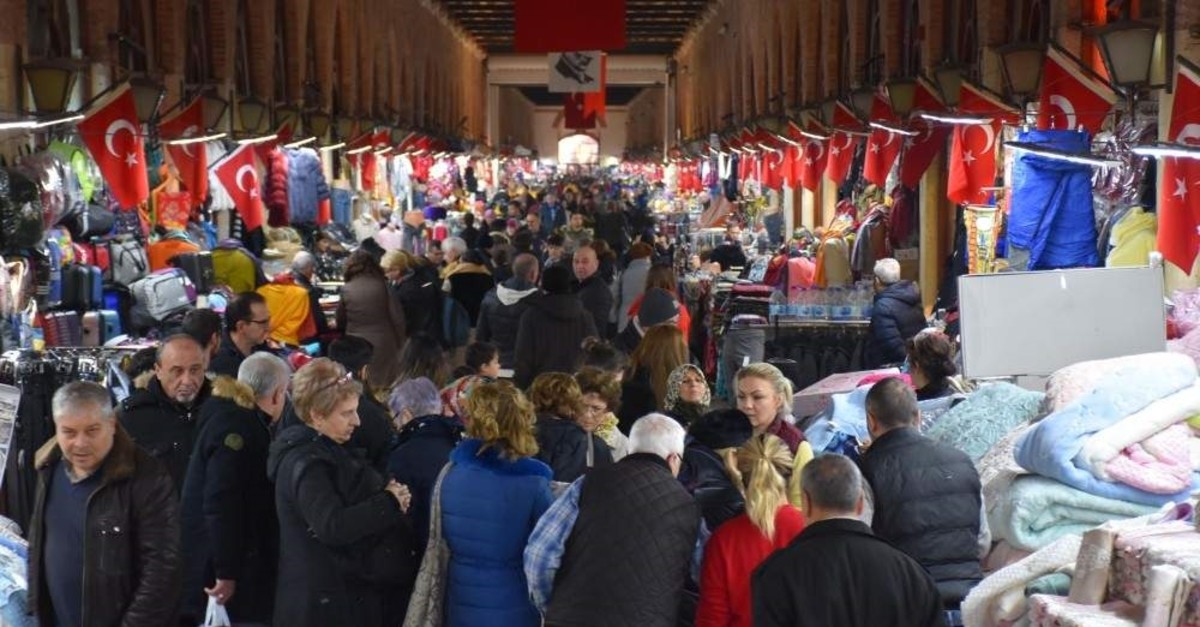 The historical bazaars of Edirne are filled with Greek and Bulgarian tourists who came for Christmas and New Year's shopping. (DHA Photo)
by Daily Sabah with DHA Dec 25, 2019 4:05 pm
The Turkish border city of Edirne has become a favorite shopping destination for neighbors from Greece and Bulgaria over the last year, following the volatility and depreciation of the Turkish lira. As the shopping season for Christmas and New Year's hits its peak, Greek and Bulgarian tourists are flocking to Edirne for every kind of present.
The Turkish lira has lost 11% of its value since the beginning of the first trading day of this year, and Turkish retail has been an attractive market for tourists who want to find good quality at affordable prices. Turkey’s northwestern province Edirne – which borders Bulgaria and Greece – has enjoyed the flock of shoppers from neighboring countries as they filled the shops and historical bazaars.
Edirne Chamber of Commerce and Industry Chairman Recep Zıpkınkurt stressed in a statement to Demirören News Agency (DHA) Wednesday that the hotels in the province are fully occupied due to Christmas and New Year's celebrations. “Entries at the customs gates have intensified in the last week and the hotels are full. Normally, we welcome 10,000 visitors in Edirne during the weekend. I suppose this number will rise to 13,000 visitors during the holiday season,” he said.
The chairman emphasized that the Greek and Bulgarian tourists who come to Edirne for shopping bring a large amount of currency. “They prefer to come to Edirne because of the exchange rate difference and spend foreign currency, reviving the economy,” he noted.
Alipaşa Bazaar Association head Yılmaz Şanış also remarked that Bulgarians and Greeks continue to shop for New Year's preparations in Edirne. “Our neighbors, who celebrate Christmas on Dec. 24 and Dec. 25, visit our city for shopping. Each tourist coming to city contributes to our economy,” he said.
RELATED TOPICS