China virus sends shockwaves across travel sector, including in Turkey 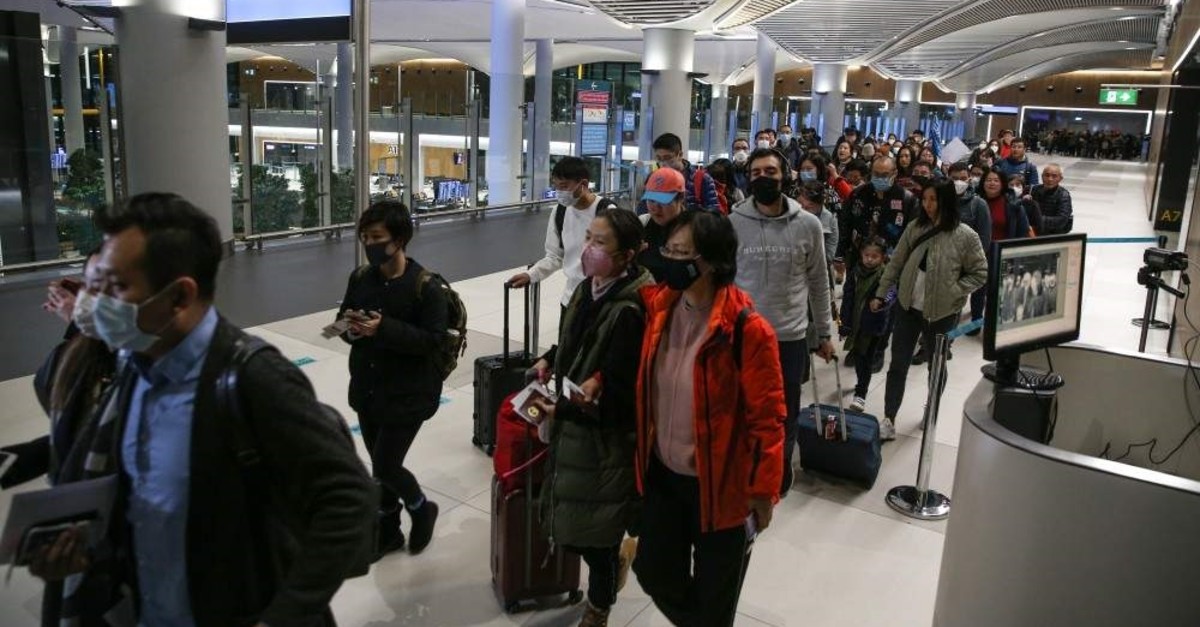 Passengers coming from China are subjected to thermal camera scanning at Istanbul Airport amid a deadly virus outbreak in the Asian country, Jan. 24, 2020. (AA Photo)
by Daily Sabah with Wires Jan 28, 2020 6:51 pm

Having recently become Chinese tourists' favorite destination, the Capadoccia region in Turkey is predicted to see the greatest economic impact from cancellations in reservations by Chinese visitors

Tourism industries in many countries around the world, including Turkey, are bracing for a heavy hit amid a deadly virus that has prompted travel restrictions in China and is sending shockwaves across the industry, which has become increasingly reliant on big-spending visitors from China.

The coronavirus outbreak that began in the central Chinese city of Wuhan, in the province of Hubei, has so far killed 106 people in China and infected more than 4,500, according to China's National Health Commission.

The flu-like virus has raised alarm globally with cases reported across Asia, Europe, the U.S. and Canada.

In order to contain the virus, China halted all group tours, affecting tourism both at home and to other countries. The travel industry faced immediate repercussions as the outbreak came during the Lunar New Year, one of the biggest travel seasons in Asia.

China extended the weeklong Lunar New Year holiday to Feb. 2 to prevent the virus from spreading. The holidays had been due to end on Jan. 30.

About 134 million Chinese traveled abroad in 2019, up 4.5% from last year, according to official figures. Before the outbreak, the China Outbound Tourism Research Institute predicted some 7 million Chinese would travel abroad for the Lunar New Year this year, up from 6.3 million in 2019.

While the biggest threat so far is said to be to China's closest neighbors, the U.S. and Europe and are likely to face major repercussions if the coronavirus outbreak spreads.

Concerns are also mounting about the impact the coronavirus may have on the world's second-biggest economy amid travel bans and the extended Lunar New Year holiday. Global stocks fell again on Tuesday, oil prices hit three-month lows and China's yuan currency dipped to its weakest in 2020.

Turkey, which has been enjoying growing numbers of Chinese visitors, is facing cancellations in February tour bookings, according to tourism officials, who say the outbreak will impact the arrival of Chinese tourists.

"Tour package sales in China are at standstill," said Hamid Kuk, a board member at the Turkish Travel Agencies Association (TÜRSAB). Sales at travel agencies fell by 50% last week, Kuk told Turkish daily Dünya on Tuesday, warning that travel restrictions would bring this figure to 100%.

He stressed that 5,000 holidays were canceled last week, corresponding to the arrival of around 10,000 Chinese tourists, adding that cancellations could increase to 20,000 this week.

The number of Chinese tourists visiting Turkey jumped by 9% in the first 11 months of 2019, reaching 403,739, according to official data. Turkey was looking to reach 1 million tourists in the coming period, a target agreed upon by both Beijing and Ankara.

Ahmet Serdar Körükçü, CEO of Dorak Holding, one of the companies bringing the highest numbers of Chinese tourists to Turkey, said cancellations from Chinese guests increased as of Friday.

"The travel ban by the Chinese government has expanded to 17 cities. Group tour cancellations continue to arrive. Through the end of this week, we will see a continuation of cancellations," Körükçü said.

Körükçü was cited by Turkish daily Sabah on Monday as saying that the reservations of around 30,000 Chinese tourists who were expected to arrive in February have been canceled as a result of the travel restriction.

He noted that each Chinese tourist spends around $1,000 on average, noting the current situation could lead to a revenue loss of $30 million in February.

Istanbul, the ancient Aegean city of Ephesus, Cappadocia in central Anatolia and the travertine paradise Pamukkale in the central Aegean province of Denizli will see the greatest impact as a result of travel restrictions and cancellations, according to TÜRSAB Chairman Müberra Eresin. She said they were about to organize a workshop in China but delayed it to November following the latest developments.

The travel ban will impact Cappadocia the most, as it has become one of the Chinese visitors' favorite spots, claimed Cappadocia Touristic Hoteliers and Operators Association Chairman Yakup Dinle.

"Fifty percent of the hotel occupancy in the region was provided from Chinese tourists," Dinle told Dünya.

"Chinese tourists, who have been spending the most in Turkey in previous years, maintained the lead in 2019 with 4% growth, according to Global Blue data. The average spending on shopping by a Chinese visitor stood at 13% of total tax-free sales in 2019 at TL 3,838," he said.

The previously unknown coronavirus strain is believed to have emerged late last year from illegally traded wildlife at a market in Wuhan, a city of 11 million people. In Wuhan, urban transport has been shut down and outgoing flights suspended.

The drop in the number of Chinese visitors to Cappadocia throughout this month mostly stems from the cancellation of Wuhan-Istanbul flights. The bookings of Chinese tourists who had planned to arrive in the Cappadocia region in February have been canceled.

"Flights from China to our country and many other countries have been temporarily suspended. The whole public transportation in Wuhan has been completely suspended. The city has been put under quarantine," TÜRSAB Cappadocia Representation Agency Chairman Talip Aldemir said.

"We hope a vaccine against this dangerous virus will be found as soon as possible to eliminate this danger," he told Demirören News Agency (DHA).

Mustafa Durmaz, the head of Göreme Tourism Development Cooperative, pointed to the fact that last year the region enjoyed a spike in arrivals of Chinese tourists. "We cannot see the same happening at the moment," he said.

However, there is still a considerable level of Chinese in Cappadocia and Göreme, Durmaz told DHA.

Turkey last week installed cameras at all airports and began scanning passengers traveling from China with thermal cameras detecting fevers, which are one of the major symptoms of the virus.

"There is no need to be too pessimistic. We hope that the virus will be controlled quickly and that Chinese tourists will arrive in our country and the region," Durmaz said. He also noted there were some cancellations in reservations for the region.

"We will be greatly affected in this direction," said Numan Atak, who runs a business in Göreme, pointing to the fact that the Chinese constitute half of the tourists arriving in the region.

"However, we think this will be a short-term. We have received some cancellations for the next few days. Some reservations may be canceled for February, but we hope that the situation will change by the April-May period," Atak noted.