Turkey aims for 58M foreign visitors, $40B in tourism revenues this year 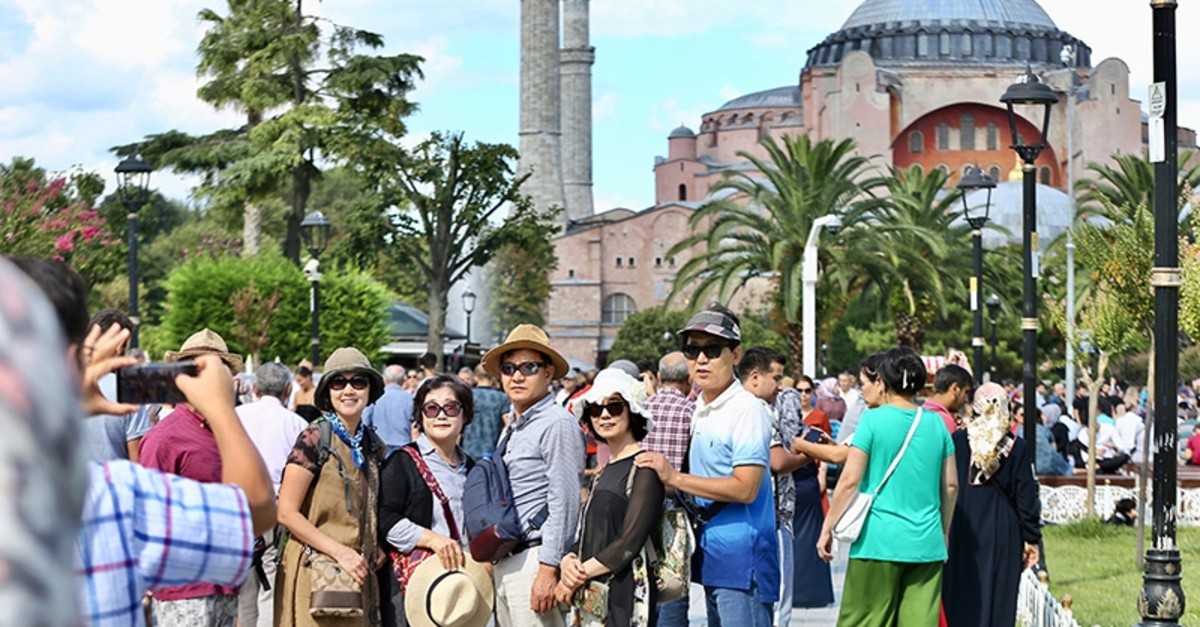 After a buoyant year in the tourism sector in 2019, Turkey is eyeing more foreign tourists and increased revenues in 2020. The country is planning to welcome 58 million foreign visitors and generate $40 billion from tourism activities this year, Culture and Tourism Minister Mehmet Nuri Ersoy said Thursday.

"While the final figures are yet to be announced by the TurkStat (Turkish Statistical Institute), we will accomplish our annual goal of 52 million visitors and $34 billion in revenues," Ersoy said during his address at the Eastern Mediterranean International Tourism and Travel Exhibition (EMITT), which kicked off Thursday in Istanbul for the 24th time and will run until Feb. 2.

The number of international visitors to Turkey surged 14.31% year-on-year to 42.9 million in the first 11 months of this year, according to the Culture and Tourism Ministry data. The Mediterranean resort city of Antalya maintained its status as Turkey's tourism capital with 14.4 million tourists in January through November. Istanbul, Turkey's largest city by population and a top tourist draw, was the No. 2 destination, drawing 13.7 million foreign visitors. The two cities hosted more than 65% of all foreign tourists visiting Turkey.

The minister underscored that it is not easy to transform the long-established conventions in the tourism industry and noted that the global sector is posting a growth performance exceeding the forecasts by the United Nations World Tourism Organization. The global tourism market accommodates 1.5 billion tourists and has an economic size of $1.5 trillion.

All countries are closely following growth in the global tourism industry and aim to take a larger share of the market. "We have therefore revised our 2023 goal from 50 million to 75 million visitors," Ersoy said. In order to accomplish tourism goals, it is necessary to create an environment where the revenues are scattered across different regions and business models, he remarked. "Unless we ensure a more inclusive distribution of tourism revenues, it is not possible to maintain sustainable and permanent policies," the minister said.

Turkey last year established the Turkey Tourism Promotion and Development Agency to promote and further develop tourism in the country. The agency aims to help Turkey take a larger slice of tourism revenues, and it will also help boost the number of tourists. The budget for the promotion was $18 billion in 2018 and $75 billion last year. The budget allocated for promotional activities, Ersoy added, has risen to $180 million this year.

Addressing the opening ceremony, the Turkish Hoteliers Federation (TÜROB) Chairman Sururi Çorabatır said EMITT has become one of the most important fairs in the area in the world.

Çorabatır noted that the fairs' contribution to the spread of tourism, which he said is concentrated in coastal areas, will encourage tourism in Anatolian cities all year round.

He recalled that Turkey was named the sixth most visited country in 2018. Last year "was a record-breaking year. Current figures show 2020 will see double-digit increases," Çorabatır added. However, he stressed that the income per capita must also increase. "This figure should first increase to $750, up from $650, and then to $1,000."

For his part, the Turkish Travel Agencies Association (TÜRSAB) Vice Chairman of the Board Ali Bilir also said the industry has left a successful year behind and has made a hopeful start into 2020.