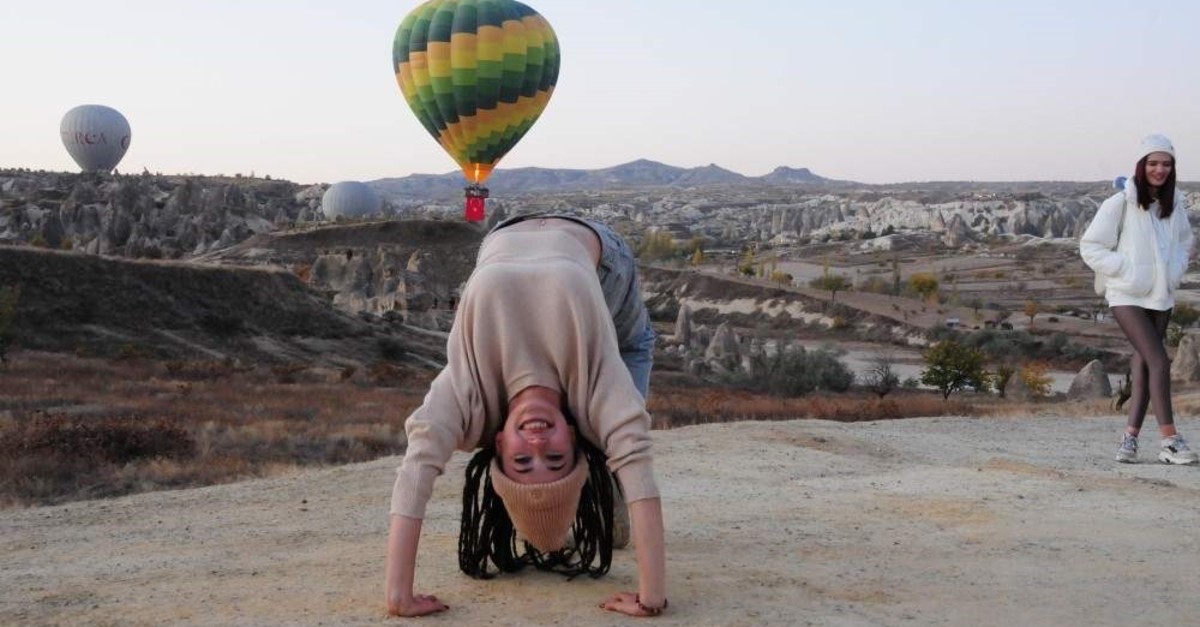 A tourist poses in front of hot air balloons in Cappadocia in central Turkey. (DHA Photo)
by Daily Sabah with AA Feb 05, 2020 5:50 pm

Cappadocia, one of Turkey's top destinations, had its best January in 11 years in terms of the number of tourists it welcomed in the first month of 2020.
The statement on Wednesday by the governorate of Nevşehir province in central Turkey, which is home to the Cappadocia region, said that 159,245 tourists visited the site in the month of January.

The Göreme Open Air Museum also became the most visited museum operating under the Provincial Culture and Tourism Directorate, with a total of 59,096 visitors.

Some 31,857 tourists have visited the Zelve archeological site in Cappadocia while Kaymaklı Underground City was visited by 26,385 foreign and Turkish tourists. The number of tourists visiting Cappadocia broke a record in 2019 with the historical region hosting more than 3.8 million foreign visitors.
The number of tourists visiting the country has been rising steadily since 2016. The number of foreign visitors declined dramatically in the year 2016 by more than 1 million due to the negative trends in Turkey's tourism industry.

Cappadocia has become a popular destination worldwide in recent years with its famous underground cities and its "fairy chimney" volcanic cones, hot air balloon trips as well as houses, churches and chapels carved into rocks, and shelters used during the early years of the Christian faith.

Last year, the Turkish Parliament also ratified a bill that aims to protect the historic fabric of the region. With the bill approved, Cappadocia Field Authority will be established, with the authority to demolish or restore buildings and sell or rent government property in Cappadocia.