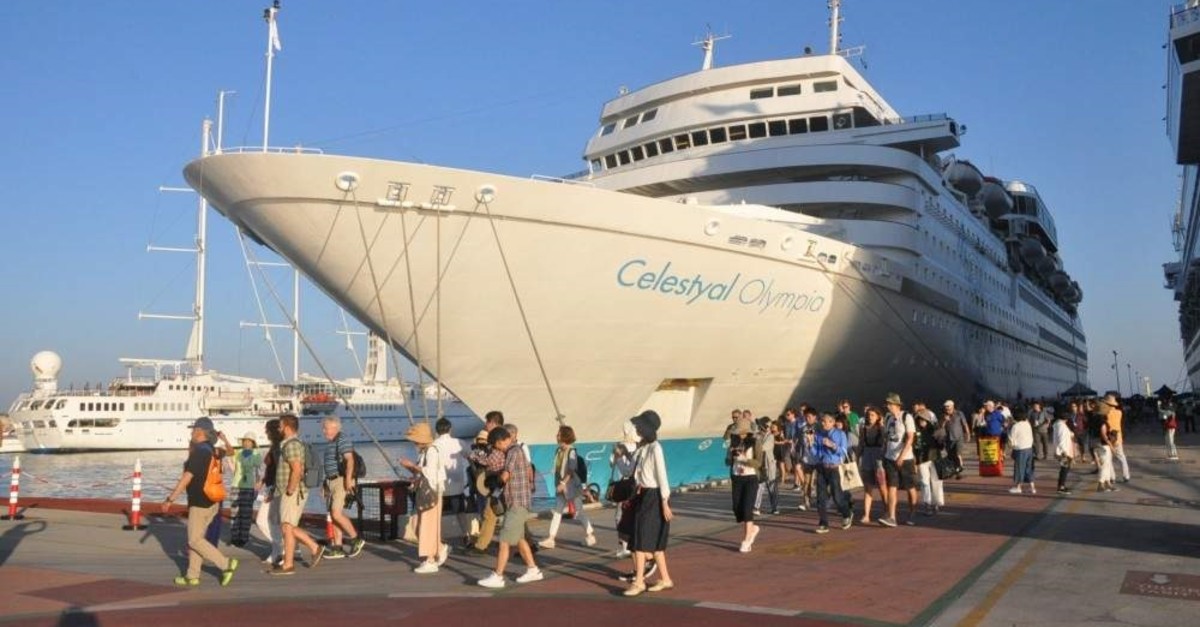 Turkey's tourism industry enjoyed record numbers in 2019 with 51.7 million visitors, the sector is eyeing a double-digit growth this year with soaring revenues due to early bookings, sector representatives say. Turkey can also become an alternative for growing numbers of cruise ships amid China's struggling of new coronavirus outbreak.

Turkish Hoteliers Federation (TÜROFED) Chairman Sururi Çorabatır told Anadolu Agency (AA) that a total of 51.7 million tourists visited Turkey last year with $34.5 billion in revenue, noting that the tourism sector is one of the most competitive sectors of the country.

"According to the early reservation figures, we estimate that we will see double-digit growth at the end of the season," he said.

Antalya and İstanbul became the leading cities, once again, to begin the year with positive figures, and if other touristic destinations across Turkey experience such growth, the number of tourists will surge to 57 million by the end of the year, Çorabatır said.

Çorabatır said that there have been significant developments in the last two years in terms of boosting the sector, highlighting that the two tourism fairs, they attended in the United Kingdom and the Netherlands also promise good outcomes. Sectoral representatives will also participate in several other fairs to be held in Germany, Russia, Ukraine and Dubai in the coming days.

Evaluating the main markets, Çorabatır said that they expect an increase in the number of tourists coming from the U.K., the Netherlands, Germany and Russia.

Saying that they recorded a 12% increase in the number of tourists coming from the Netherlands in 2019, Çorabatır noted that they expect a farther increase this year considering the positive outcome of the International Utrecht Tourism Fair.

Çorabatır stated that they are expecting a serious increase in German tourists as well and that the early bookings received from the country indicate this, especially when compared to the same period of the previous year.

He added that the sales to Russia are mostly made after April, thus it is early to make predictions though it seems positive, too.

Among others, Antalya hosted a record number of tourists in the first month of the year with 186.225 tourists visited the city.

"The number of the tourists visiting Antalya reported a 31% increase year-on-year and most of the visitors were from Russia and Germany, but, Çorabatır says, there is also an increase in the number of tourists coming from Poland, Slovakia, Albania, Czech Republic and Romania.

Speaking on the impact of the new coronavirus outbreak in China to the Turkish tourism sector, Çorabatır said, they do expect a decrease in the number of Chinese tourists especially in Istanbul and the Cappadocia region in central Turkey, however, the numbers can be compensated with alternative markets, thus, they don't expect a serious negative impact, he said.

The new coronavirus emerged in China at the end of last year has already claimed over 800 lives, most of them recorded in central Hubei province of China where the virus originated, causing the cancelation of flights apart from the lockdowns on cities to curb the deadly disease.

An alternative to China for cruise lines

Meanwhile, Turkey has also been receiving growing demand for cruise tourism in recent years which is expected to further increase, due to Turkey being an alternative destination for cruise ships from Europe to China. Around 344 cruise ships anchored on Turkish coasts in 2019, which was only 247 in the year before, AA report said, citing data from Coastal Safety Directorate.

Most cruise lines arrived in the country in August and July, 67 and 59 respectively.

A total of 300,896 passengers were transported last year by cruise ships coming or leaving from Turkey. Among those, some 221,372 were transit passengers.

Kuşadası in western Turkey's Aydın province become the most tourist hosting port with 197 ships while the Yalova port in northwestern Turkey reported the fewest number of ships, with only one cruise ship anchored at its coast.

Tatsuya Nakamori, senior manager of Japanese travel agency HIS, also said that the coronavirus outbreak in China is a global crisis yet every crisis has an opportunity in it.

"Therefore we need to think about how to turn this negative process into an opportunity for the tourism sector," he said.

Stating that the trips planned to China and to other countries in the region have been canceled worldwide, Tatsuya emphasized that these trips will, however, continue to be made to other alternative destinations whether for business purposes or pleasure, highlighting the opportunities available for other touristic destinations.