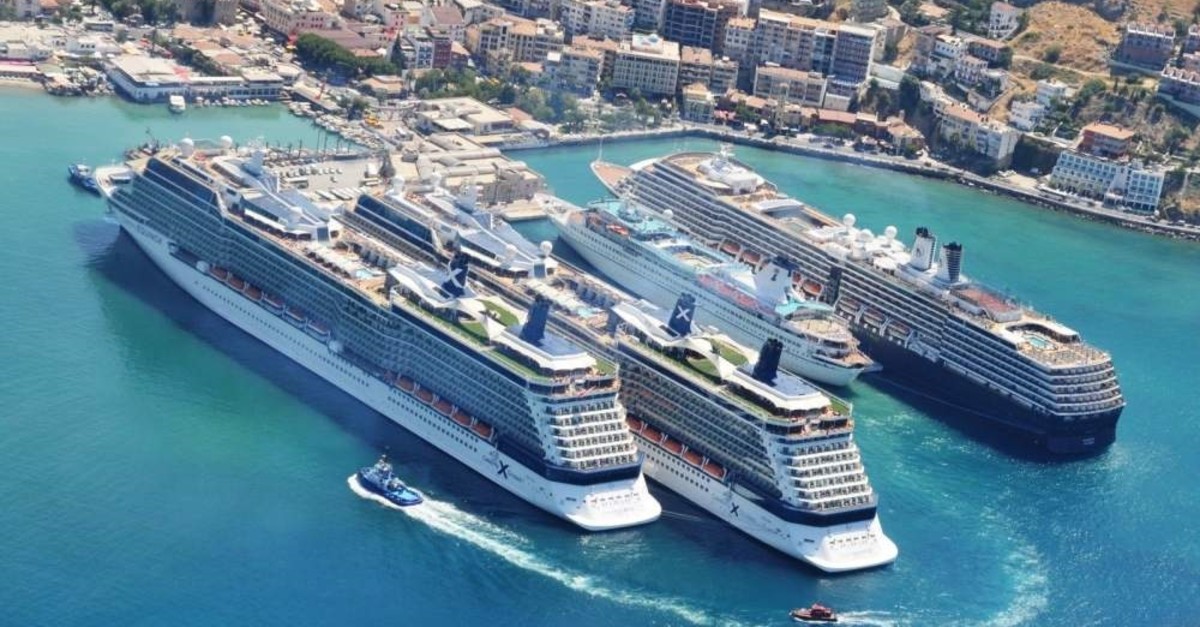 Face to face with the coronavirus outbreak, cruise liners are canceling their voyages to the Far East and have turned toward other parts of the world, including the Mediterranean. Here, Turkey comes to the fore as the most attractive port, according to industry officials.

Norwegian Cruise Line was one of the first to announce it had canceled a number of its trips to the Far East and will be adding additional trips to Turkey.

Along with the 12 planned trips for Ege Port in the Kuşadası region of Turkey's Aegean province of Aydın for this year, the company has arranged an additional 30 trips for Kuşadası with a total capacity of over 60,000 passengers.

Other companies such as Royal Caribbean and Celestyal are expected to organize 41 and 108 trips, respectively, for Turkey as well.

The industry officials told the Sabah newspaper Wednesday that cruise companies with voyages in the Far East are making new plans, adding: "The primary route is the Mediterranean where Turkey is seen as the safest port. Cruises not included in this year's plan could turn their direction to Turkey at the last moment. However, we will see the biggest impact in 2021. There is a huge demand for both Istanbul and other ports."

Emphasizing that Turkey is one of the safest ports at the moment, MSC Cruises General Manager Necla Tuncel said that some cruises might switch their routes to the country at the last minute, which would lead to a rise above the expected number of tours in 2021.

Royal Caribbean Turkey General Manager Alper Taşkıranlar said that there have been no cases of the new virus on their cruises so far, noting that they have nevertheless boosted measures in line with the warnings of the World Health Organization (WHO).

"In this context, passengers with Chinese and Hong Kong passports are not allowed on our ships regardless of their place of residence. We had a cruise scheduled to depart from the Chinese port, but we canceled it," he added.

Indicating that they will organize 41 expeditions to Turkey this year, Taşkıranlar said that this will rise to 88 in 2021. Also, Celebrity Apex, the newest cruise ship in the world, will come to Galataport with 3,000 passengers in July. Touching on the company's plans for 2021, Taşkıranlar stated: "Turkey is considered a safe port. 2021 will be a year in which there will be a very significant increase in cruising in our country."

Istanbul's Galataport is set to be inaugurated soon and will begin operating at full capacity in 2021. The port has already begun receiving bookings from cruise liners seeking to drop passengers off in Istanbul's cultural heart.

Located on the shore along Istanbul's central Karaköy district, Galataport expects to welcome 1.5 million cruise tourists to Istanbul. The port has a capacity to host around 25 million visitors per year, including 7 million foreigners. The estimated revenues from the increasing number of tourists are expected to reach around $1 billion.

Royal Caribbean Turkey Marketing and Communication Director Cihangir Canıyılmaz pointed out the rise in the demands of Turkish passengers, saying: "The early booking period in 2020 is beyond our expectations. Demand is up 20% compared to last year. There is high interest, especially in Miami and the Caribbean, northern Europe, the Mediterranean and Alaska."

Celestyal Cruises Turkey Director Özgü Alnıtemiz stated that they will hold eight voyages to Turkey in April, May and October, as well as 100 others in Kuşadası from March to November. "We will bring 150,000 foreign passengers to Turkey on 108 cruises," he said.

MSC Cruises, which had excluded Turkey from its route in the last five years, has turned its course to the country again.

Around 344 cruise ships anchored on Turkish coasts in 2019, up from only 247 in the year before, according to data from the Coastal Safety Directorate.

The most cruise lines arrived in the country during the latter half of the summer, with 59 cruises in July and 67 cruises in August. A total of 300,896 passengers were transported last year by cruise ships coming or leaving from Turkey. Among those, some 221,372 were transit passengers. Kuşadası became the most tourist-hosting port with 197 ships.