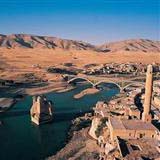 based foundation is urging concerted international action to preserve world-famed cultural heritage sites at risk of loss or damage, including Cambodia’s ancient Angkor Wat temple complex, one of the great landmarks of Asia.

The Global Heritage Fund says in a report circulated Monday that "of the nearly 500 global heritage sites in the 100 poorest and emerging countries of the world ... over 200 are facing irreversible loss and damage today."

Among the sites highlighted are Sumerian archeological sites in southern Iraq it says that are subject to massive looting; the ancient city of Hasankeyf in Turkey that could be flooded by a new dam project; and Kashgar in western China, where old quarters face demolition under government plans to guard against earthquakes that will relocate more than 50,000 people.

The report says that visitors to Angkor Wat increased by 188 per cent from 840,000 in 2000 to 2.4 million in 2009. The temples were built when Angkorian kings ruled over much of Southeast Asia between the ninth and 14th centuries. After centuries of abandonment — and neglect in the 1970s during a civil war — they have emerged as Cambodia's leading tourist destination.