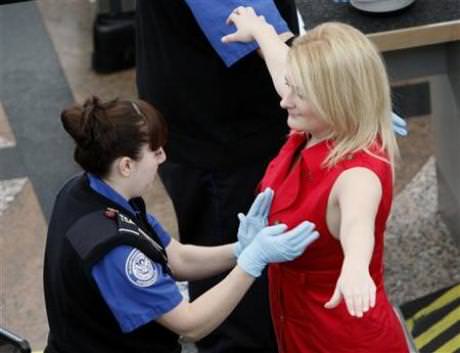 An internet "Don't Touch My Junk" campaign encouraging Thanksgiving travellers to refuse airport full body searches appeared to fizzle out on Wednesday amid a charm offensive from security officials.

An internet "Don't Touch My Junk" campaign encouraging Thanksgiving travellers to refuse airport full body searches appeared to fizzle out on Wednesday amid a charm offensive from security officials.

"The agents all wished me Happy Holidays. They must have gotten some directive to be friendlier," said Benjamin Billips, 30, of Bartlett, Illinois, who travelled from New York to Chicago.

"All of the TSA employees were nice," said Hannah Kimmel, a law student in Chicago travelling to Minnesota from Chicago's O'Hare International Airport, said of the Transportation Security Administration staff.

Many passengers arrived at airports expecting an ordeal after media and internet horror stories of aggressive patdowns, surly security officials and argumentative passengers.

Media attention to the patdowns surged after a widely viewed YouTube video captured audio of a California man, John Tyner, telling a security official during a full body search: "If you touch my junk I'm going to have you arrested."

Critics of the body scans used "Don't touch my junk" as a rallying cry to encourage travellers to refuse the scans during the heaviest travel time of the year for Americans.

Some travellers were aware of the protest campaign but few heeded it, according to interviews with passengers at airports across the country.

One who did seem to object was Nick Mazzanti, a New York resident who works at a public relations firm and was at LaGuardia airport. "I'm going to ask for a (machine) scan," he said. "I didn't want them touching my junk."

But at Chicago's O'Hare, the world's third busiest airport, there was no sign of protests or of the dreaded patdowns. Both passengers and TSA seemed on their best behaviour.

"I am glad I didn't see more people opting out on my way here," said Walter Fitzwater, 55, a computer technician from Minneapolis travelling to New York with his wife and child. "It would only take a few to really back up the lines at security."

"There wasn't even a line. It took about 5 minutes in total to get through security," said Emile Trisfith, 19, a music student in Chicago headed home to New York. "I was prepared for the worst."

Many travellers supported the heightened security after recent attempts to send parcel bombs through an air freight service to the United States.

Jonathan Millard, 42, a Chicago resident and frequent flier, said that he supports increased security because it keeps Americans safe.

"Today I went through the full body scanner, which I have no problem with," Millard said.

"I think that most of us forget that there is a terrorist threat. There are probably going to be more terrorist attacks and I think we have to be vigilant."