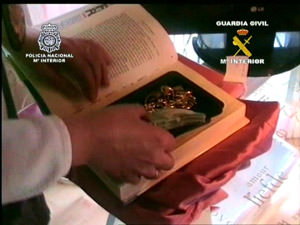 Spanish police have broken up a gang that pillaged archeological sites, arresting 57 people and seizing thousands of valuable items from pre-historic, Roman or medieval eras, they said Friday.

"Among the items were arrow heads, Roman and medieval coins, Roman brooches, earrings and clasps from the Visigoth era, polished stone axes and pillars with Arab inscriptions," police said in a statement.

Officers also seized "thousands of coins of different types and dates, but mostly from the Roman era."

The gang operated mostly in the southern region of Andalucia, but also "travelled to other regions to pillage sites."

The items, once restored, were sold at private auctions, on the Internet or directly to private collectors who were "regular customers."

Most of the items were originals. But some were copies that had been made to look to like antiques.

In another investigation as part the same operation, police detained a further 28 people for suspected trafficking in precious metals and money-laundering.

The gold was melted down then sent to Germany, Turkey, Italy or Switzerland where it was refined.

The police said the suspected head of the gang that pillaged the archeological sites was also believed to be involved in the trafficking of the precious metals.