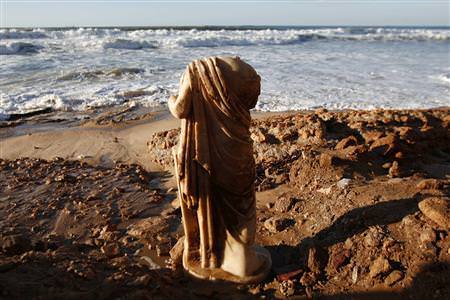 A Roman statue that had been buried for centuries has been unearthed by the winter gales that have raked Israel's coast.

The white-marble figure of a woman in toga and sandals was found in the remains of a cliff that crumbled under the force of winds, waves and rain at the ancient port of Ashkelon, the Israel Antiquities Authority said on Tuesday.
"The sea gave us this amazing statue," said Yigal Israeli, a researcher with the authority.

Also recovered at the site were fragments of a Roman bath-house and mosaics.

But long-established Israeli archaeological sites such as the ruins of coastal Caesarea suffered serious damage in the storm, so the statue's find brought the Authority little joy.

"We don't see this discovery as such good news," said another Authority official, who declined to be named. "Better that relics remain hidden and protected, than that they be exposed and damaged."