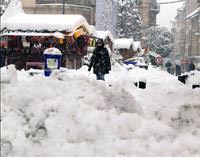 Birds in Britain's coastal regions are the latest to be threatened by freezing weather, the Royal Society Protection of Birds (RSPB) said this week.

The charity has called on walkers, anglers and birdwatchers to reduce the disturbance they may cause to flocks of birds when enjoying the countryside over the Christmas holidays after freezing temperatures and snowfall in December.

"During freezing conditions disturbance forces the birds to squander their precious energy reserves by taking flight when they need to spend as much time as possible feeding or quietly roosting," said Chris Cockburn, RSPB warden at Langstone Harbor in the southern English county of Hampshire.

"We hope people out and about in the countryside will heed our advice, allowing the thousands of birds which visit our coast and wetlands during the winter to stand a better chance of survival."

Migratory birds, such as Brent geese, wigeons - a species of duck - and wading birds named dunlins are among the species affected by the cold weather.

The birds nest in Arctic regions and northern and eastern Europe during the summer months but come to Britain in winter to escape the harsher weather in these regions.

However, the birds - especially coastal birds which only feed at low tide - are experiencing difficulty finding food, the statement said.

Freezing temperatures are also causing a change in behavior as birds become more reluctant to fly away when approached, according to the Joint Nature Conservation Committee.

This has had a knock-on effect on waterfowl hunters who have been asked to cut back on shooting this winter to reduce disturbances to waterfowl.

Duck and goose hunting -- known as "wildfowling" -- has been called off in Scotland since December 10th, according to the British Trust for Ornithology (BTO). A review scheduled to take place this week will decide if further suspension is necessary.

In England and Wales voluntary restraint during hunting for wild fowl is already in place a day earlier than required under the criteria due to an earlier cold snap.

The current criteria require that after seven days of cold weather hunters are called upon to exercise "voluntary restraint." If the cold weather continues a "statutory suspension" comes into force.

The system of alert, which is monitored by the British Association of Shooting and Conservation and involves a number of statutory agencies and nongovernmental organizations, was established in 1983 after severe cold weather led to large numbers of bird deaths.

Unusually large numbers of barn owls have also been found dead, with 31 dead owls reported to the BTO in one week. Cold weather and difficulty finding small mammals due to snow cover and low temperatures was to blame.