A bomb threat on a Turkish Airlines plane leads to panic 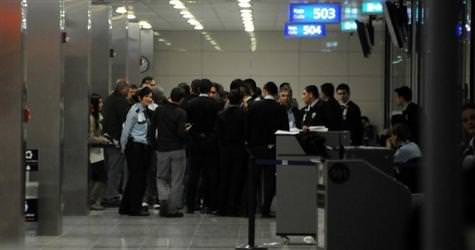 A note containing a bomb threat found on a THY flight from Nicosia to Istanbul on Sunday night resulted in widespread panic aboard the aircraft and necessitated priority landing in Istanbul. A note was found shortly after take-off of the 106-passenger Turkish Airlines flight TK 5407 which read, “There is a bomb on the plane that will explode in 45 minutes.”

Cabin crew notified the pilot of the situation and the pilot then immediately contacted the authorities. The flight was given priority landing status and arrived at Istanbul's Atatürk Airport at 20:13.

Once the passengers had left the plane, bomb squad teams accompanied by dogs conducted a thorough search of the air craft. In addition, firefighters and medical teams were also on stand-by. The threat however, was found to be a hoax.

Well-known television personality Seda Sayan was amongst the passengers on the plane and explained how scared they all were. "I was on the plane with Oya Başar, Tarık Ünlüoğlu, and my manager Stelyo Pipis. Stelyo got up to go to the bathroom and then returned pale as anything. We thought there was something wrong with the plane, but when the hostess mentioned a bomb threat I suddenly stood up. Everyone was standing. Some fainted and came to, but everyone was panicked."