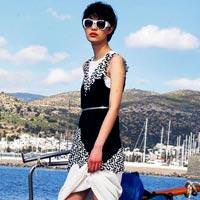 For the project, which is in conjunction with the Ministry of Culture and Tourism and the Bodrum Peninsula Promotion Foundation, an eight-member crew came in from China and is currently conducting a fashion shoot in Bodrum's historical and touristic sites.
The photographs will be released in either the March or April edition. Crew manager Anita He states that their intentions were to promote Bodrum and Turkey. "We are going to use eight photographs from Bodrum in the magazine. These photos will include Bodrum's nature, sea, flowers as well as some of the town's most well-known and loved streets."