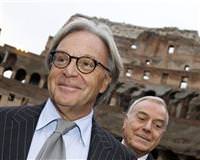 "I won't put Tod's shoes on the Colosseum," the company's chief executive, Diego Della Valle, promised at a news conference when asked if huge advertising billboards would appear on the almost 2,000-year-old monument.

Officials said the branding will be discreet, such as relatively small placards at the base of the Colosseum recognizing Tod's as the sponsor. The company will also film the restoration and use it in its publicity.

The 80 A.D. Roman amphitheatre, which housed bloody public spectacles including gladiator fights, mock sea battles and animal shows, is one of the world's most famous monuments and attracts 6 million visitors each year.

But like other world-class archeological sites in Italy, it has suffered badly in recent years for lack of funds and proper upkeep, and the cash-strapped Italian government has decided to turn to the private sector.

"We wanted to make a gesture which said 'if the Colosseum needs to be restored, we are here'," Della Valle said. "An Italian company that has the luck of doing well and represents 'Made in Italy' ... decided to say 'thank you' to the country."

The urgency surrounding the monument was highlighted last May when chunks of mortar plunged through a protective netting.

Piero Meogrossi, the architect overseeing the restoration work, said the Colosseum has been getting 500,000 euros of public money a year for its upkeep, one tenth of what it needs.

"It's the end of a nightmare," said grateful Rome Mayor Gianni Alemanno.

Sponsorship of the arts was for decades anathema in Italy, particularly when leftist administrations were in power. But economic hard times have led governments to the doorsteps of the private sector with cap in hand.

Last year the government launched a tender to find private sponsors for the Colosseum project, which it hopes to use as a model for restoring other national monuments.

But the tender fell through because the proposals that were submitted were inadequate, so Rome officials decided to negotiate directly with several interested companies and Tod's, which makes luxury shoes and bags, prevailed.

Della Valle said he hoped other private companies would step forward to help fund maintenance of other treasures such as the Pompeii archaeological ruins, which have been plagued by a string of collapses in recent months.

Work is due to start in March but the Colosseum will remain open to the public throughout the restoration, which is expected to last about two years.