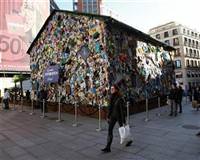 Celebrating a tourism fair staged this week to promote Spain's biggest industry is a new hotel in central Madrid whose maker freely admits is rubbish.

"We must know and we must understand that the oceans are the biggest garbage dumps of the world," Schult told Reuters.

His Corona Extra Save the Beach Hotel opened its doors on January 19 and operators say its five double rooms have been fully booked for the four days in which it will be taking guests.

"The world is a hotel and so as a parable, I show the world as a hotel, and this world we only have rented and we have to realize that we in this time fill up the whole world with garbage," Shult said outside the hotel.

Schult has been getting support from some pretty famous patrons, including Danish model Helena Christensen -- who has spent a night in the hotel -- French explorer Alexandra Cousteau and jewelry designer Jade Jagger.