U.S., Turkey offer to fly citizens out of Egypt 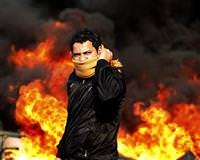 The United States and Turkey on Sunday offered to evacuate citizens wanting to leave Egypt, where violent protests against the rule of President Hosni Mubarak have given way in some parts of Cairo to looting.

Other governments advised their citizens to leave the country or avoid traveling there if possible, although Russian and German tourists at Red Sea resorts made no move to cut short their holidays.

Witnesses said some businesses were starting to evacuate their staff and reported scenes of chaos at the airport, where many people, including Egyptians, were trying to fly out.

"The U.S. embassy in Cairo informs U.S. citizens in Egypt who wish to depart that the Department of State is making arrangements to provide transportation to safe haven locations in Europe," the statement said, describing the evacuation as voluntary.

Britain hardened its advice to Britons, advising them to leave Cairo, Suez and Alexandria "where it is safe to do so."

Germany's Federal Foreign Office was advising against trips to major cities but excluded the Red Sea holiday regions from its advisory.

European tour operators and airlines have canceled trips to Cairo, dealing a blow to a tourism industry which provides about one in eight jobs in the country beset by high unemployment.

In the residential area of Cairo, two big buses were parked outside the offices of the Italian oil firm ENI to evacuate families, witnesses said. One foreign employee of the company said his wife and three children would go but he would stay. There was no immediate comment from ENI.

"It's not an issue during the day, it's at night when we don't know what will happen," the employee said.

Near the buses was a four-wheel-drive vehicle with security men. Several foreign families were waiting to board the buses.

Austrian energy group OMV said it was evacuating one expatriate worker and his family.

In Baku, an Azeri Foreign Ministry spokesman said an accountant at the Azeri embassy in Egypt was killed in street clashes in Cairo late on Saturday on his way home from work.

The spokesman said the government was sending a plane to Cairo on Sunday to pick up the body and evacuate about 70 Azeris studying in Egypt.

China issued a warning to its citizens in Egypt, urging Chinese travelers to reconsider their plans or seek assistance from the Chinese embassy.

Most of the estimated 40,000 Russians holidaying in Egypt, mostly in resorts around Khurgada and Sharm-El-Sheik, have no plans to cut short their trips despite the demonstrations, the acting head of the Russian Federal Tourism Agency, Alexander Radkov, told Interfax news agency on Saturday.

"On the whole, the situation in Egyptian resorts remains calm. Tourists are resting normally. We have no worries about them so far ... People do not want to interrupt their holiday," he said.

TUI Deutschland, the German arm of TUI Travel, said cancellations and rebookings of trips to the Red Sea coast had so far not increased, and tourists already in Egypt had not asked to return home early.

Tour operator Thomas Cook flew a fresh batch of tourists to the Red Sea coast from Germany on Sunday, a spokeswoman for the company said.

"Our guests are doing fine. And none of them have said they want to come home now," she said.

Egypt's tourism industry, which generates more than 11 percent of the country's GDP, took a hit in 1997 when gunmen killed 58 tourists and four Egyptians at an ancient temple in Luxor and after the September 11, 2001, attacks.

Decreases in tourist levels have so far always been temporary, though, and the industry's trend over the last decade has been broadly upward.