Mass evacuation out of Egypt 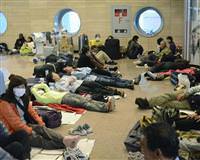 Governments and tour operators took steps on Monday to pull their nationals out of Egypt on chartered or scheduled flights as protesters pressed their campaign to remove President Hosni Mubarak.

Here are details by country of some of the measures being taken.

BELGIUM: Belgian travel agency Jetair said on its website it was working on an evacuation plan due to start on Monday. Belgian media said about 1,700 tourists were involved.

BULGARIA: Bulgaria advised its citizens to refrain from travelling to Egypt. Some 300 Bulgarian citizens, including tourists, are currently there. Bulgaria said it would send a government plane on Tuesday to pick up more than 70 Bulgarians.

CHINA: Two Chinese airlines, Air China and Hainan Air, said they would each send a chartered flight to Cairo on Monday to bring home Chinese citizens. There were at least 500 Chinese nationals stuck at Cairo airport, a Chinese consular official in the Egyptian capital said.

FINLAND: Finland's Foreign Ministry decided on Sunday to send a plane to evacuate Finns living in or visiting Egypt.

-- Nokia Siemens said it had started to evacuate its foreign employees and their families from Egypt to Dubai. The firm has about 400 employees in Egypt including some 50 foreign staff.

GERMANY: Germany issued a travel warning late on Sunday singling out hotspots Cairo, Alexandria and Suez. although it described the situation at Red Sea tourist destinations as calm for the moment.

-- German tour operator Rewe said it had cancelled all holidays and trips to Cairo until Feb. 7 to relieve pressure on Egypt's infrastructure, although customers already in Red Sea resorts should be able to continue their holidays. The company has 3,100 customers in Egypt at present.

-- Lufthansa (LHAG.DE) increased the number of planes it is sending to Cairo on Monday to three because of high demand. The third aircraft, a Boeing 747, will fly to Cairo empty and return to Frankfurt with Germans trying to leave Egypt.

GREECE: Greece said three military C-130 transport aircraft would take off at 0700 GMT on Tuesday as part of a mission to evacuate Greeks from Egypt. About 100 Greeks have officially requested to return to Greece. Media reported about 20,000 lived and worked in Egypt.

-- Earlier on Monday, an Aegean airlines (AGNr.AT) commercial flight with Greek and U.S passengers on board arrived at Athens airport from Cairo.

LEBANON: Lebanon's Middle East Airlines, which flies twice daily between Beirut and Cairo, laid on an extra flight on Sunday carrying 147 passengers to Lebanon. A total of 557 people flew from Cairo to Beirut on Sunday.

-- The airline planned one return flight to Cairo on Monday, while EgyptAir flights between Lebanon and Egypt were cancelled.

PAKISTAN: Pakistan's ambassador in Cairo, Seema Naqvi, said there were a total of 150 Pakistani families living in Egypt, about 450 to 500 people in total. Some had already left.

PORTUGAL: Portugal is sending a transport plane to Cairo to evacuate Portuguese who want to leave. About 100 Portuguese citizens are resident in Egypt. The government has issued a travel warning, advising against going to Egypt.

SERBIA: Serbia's ambassador to Egypt Dejan Vasiljavic said it would fly 120 Serb tourists out of the Red Sea resort of Hurgada later on Monday. The embassy is in contact with about 200 Serbs who live in Egypt, mostly in Cairo.

SLOVAKIA: At least 120 Slovaks are in Egypt, most of them in holiday resorts, but there are some in Cairo and Alexandria. Slovaks were advised not to travel to Egypt.

SOUTH AFRICA: South Africa said it has found a flight out of Egypt via Turkey for nationals stranded at Cairo airport. It called on its other citizens in Egypt to stay in a safe place and contact the embassy.

SPAIN: Spain said it had not started evacuation measures but was advising nationals not to travel to Egypt.

SWITZERLAND: Switzerland issued a travel warning for non-essential trips to Egypt on Sunday. Swiss tour operator Hotelplan, a subsidiary of retailer Migros, said 560 of its customers were on holiday in Egypt, while Kuoni (KUNN.S) has about 600 customers in the country.

-- Global food giant Nestle (NESN.VX), which operates three factories and has 3,000 employees in Egypt, said its operations there had been interrupted because of the unrest and it was evacuating the families of about 20 expatriates.

-- Swiss engineering group ABB (ABBN.VX) said it had some 1,600 employees in Egypt and several expats had left.

TURKEY: Turkey said 1,548 Turks had been brought back from Egypt. A total of 1,114 had been evacuated from Alexandria and Cairo and 434 returned on scheduled flights in the past three days.

UNITED KINGDOM: Britain has advised against all but essential travel to Cairo (all four governorates, including Giza), Alexandria, Luxor and Suez.

-- Thomson and First Choice said they had more than 11,000 customers in Egypt, with about 8,700 of these in Sharm el Sheikh and 950 in Luxor. They had no customers in Cairo.

UNITED STATES: The U.S. State Department said more than 220 U.S. citizens had been evacuated so far from Egypt and more than 2,400 Americans had requested assistance to leave the country.

-- It said it hoped to bring 900 U.S. citizens out of the country on Monday with flights departing for Athens, Cyprus and Istanbul. There are 52,000 Americans registered with the embassy in Cairo.

-- U.S.-based Delta Air Lines said on Friday it was suspending its service to Cairo indefinitely.