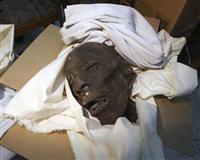 Egypt's pharaonic treasures have survived the unrest almost unscathed and restoration work has started on the few artifacts damaged in a raid on the Egyptian Museum, the head of antiquities said Wednesday.

Zahi Hawass said no artifacts had been stolen in the break-in at the museum two weeks ago, when mass protests against President Hosni Mubarak's rule erupted, police left the streets and law and order broke down.

Twenty-five objects were in need of restoration work including a statue of King Tutankhamun, part of the treasure trove discovered in his tomb in Luxor's Valley of the Kings, uncovered by British archaeologist Howard Carter in 1922.

"We started the restoration two days ago. In three days, all these monuments will be completely restored," Hawass told Reuters in an interview at his Cairo office.

The museum had in part been saved by the fact it was night-time when the robbers broke in, Hawass said. They had stolen gold souvenirs from the museum shop. "Thank God the museum was dark and they could not see anything," he said.

He praised Egyptian anti-government protesters who had stood guard outside the museum and caught some of the thieves as they tried to get away. "It was wonderful to find that these real Egyptians wanted to protect the museum," he said.

Locks on the gates of tombs at the Saqqara pyramids south of Cairo had been broken, but it appeared nobody had entered, he said. "All the tombs and the pyramids at Saqqara were completely safe," he said. The same applied to the Great Pyramids at Giza and the tombs in the Valley of the Kings.

In the Sinai Peninsula, bedouin had broken into an antiquities storage facility and taken 393 objects, Hawass said, but said these were returned when he went on television to say stolen artifacts could never be sold without him finding out.

He said the authorities had yet to decide when the pyramids would be reopened to the public. The Supreme Council for Antiquities, which relies largely on ticket sales for its revenues, would be studying new ways to make money, he said.

One idea would be to stage more exhibitions overseas. Another could be to produce replica artifacts for sale, he said, adding he was not expecting a quick recovery in tourism.