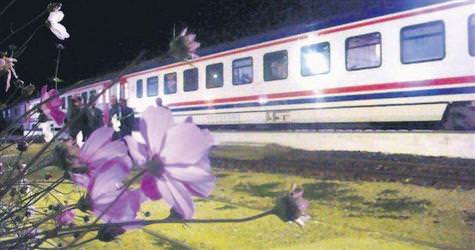 Train service from Istanbul to Thessalonica, which was initiated six years ago in an effort to reinforce relations, will soon be a thing of the past due to the economic crisis.

According to the Turkish State Railways Directorate or TCDD, International Train Department Manager Yusuf Çağatay, the Friendship (Dostluk) / Filia Express service will come to an end on February 12th. Çağatay explained that they were notified by the Greek Railroads Department on January 30th, 2011, which claimed the reason behind the motion to put the express service on hold was due to the economic crisis.

INTERNATIONAL SERVICES HALTED
According to Çağatay, as the Athens administration has been wrestling with the economic crisis; a request was made through the Ministry of Finance to the Railways Directorate to put all international train services on hold for the time being. Upon which, the Greek Railways Directorate sent a petition to the Turkish State Railways Directorate, requesting train services be postponed due to the economic crisis. The Greek officials stated that demand has dwindled during the winter months and deliberations could be made in the future for the railroad line to return to operation.
'IT HAS POLITICAL VALUE'
According to Çağatay, the express rail line service from Istanbul to Thessalonica, which started in July, 2005, has more 'strategic value' than economic. "This rail line, which was not commercial, between the two nations has political significance. It was a significant trend. We started off with great hopes. It wasn't significantly profitable; however it received enough interest to cover its own costs. We have never seen the number of reservations drop below 50 percent of capacity." Underlining the importance of the 'friendship' Dostluk Train service starting up again, Çağatay states; "We were only informed that the service has been put on hold for the time being. It was also stated that within the next few months, we will meet in Athens to reassess the situation. I believe that come spring, the train service will begin again."