Turks take to the sea as cruises become cheap… 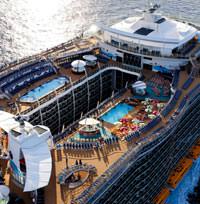 The increasing competition in the cruise industry has resulted in tour prices decreasing by up to 200 Euros compared to last year. When demand increased, a number of companies began adding a series of new tours such as one from Istanbul to Miami in 25 days, while some companies have gone ahead and rented cruise ships for the entire season.

The increase in number of ships in the sea has resulted in competition between cruise tour operators which has brought prices down considerably. Tours have dropped by 200 Euros in the Mediterranean, Baltic and Greek Islands. With additional reductions made for early reservations, tours are selling at almost 400 Euros cheaper than the seasonal price. According to Royal Caribbean Operations Manager Seda Özkan, in comparison to the same period last year, they are seeing 60-70 percent more demand. Explaining that this year will be the first time that they are starting long trips departing from Istanbul, Özkan states, "We have started 25-day-long tours from Istanbul to Miami and Istanbul to Brazil. The tours which will be done in November have already received significant interest. The 25-day-long Istanbul to Miami tour costs 1,250 Euros, while the Istanbul to Brazil tour starts at 825 Euros."
MSC Cruises Sales and Marketing Manager Serpil Köklü states that the difference between season prices and early reservation prices can reach up to 400 Euros. Mert Bahadır Şen, from cruise operators Golden Bay Tur, states, "There are up to 200 Euro decreases in the price of our Baltic tours. A one-week tour has now dropped to 1,090 Euro+VAT."
Selma Gürel from Apex Tours states that due to the demand, they have rented the Ocean Majestic ship and will be conducting four-day tours of the Greek Islands, which depart from Izmir for 3090 Euros and will not require visas."