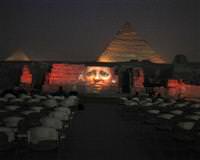 Egypt's uprising emptied the hotels, casinos and bars of a tourist trade that employs one in eight Egyptians, but staff expect the recovery to be quick and the revolution to boost business in the long run.

With its year-round warm beaches and wealth of pharaonic antiquities, Egypt earned nearly $11 billion from tourism in 2009, according to the tourism ministry, accounting for over a tenth of gross domestic product.

An 18-day upheaval prompted many countries to issue warnings against travel in Egypt, hamstringing the industry. Sites such as the Giza Pyramids, usually overrun with sunburned visitors, stood ominously empty.

But workers in Sharm El-Sheikh, a Sinai peninsula resort that usually crams in package tourists by the jetful this time of year, say they hope future holiday-makers will be drawn to a country that threw off the shackles of authoritarian rule.

Hotel occupancy in Sharm el-Sheikh and Hurghada, another Red Sea tourist hub, sank to 11 percent from 75 percent after the unrest erupted on January 25, the Egyptian Hotels Association said.

During his brief time as vice president, Omar Suleiman said about 1 million tourists fled Egypt, costing it some $1 billion.

It's hardly the first time this decade that Egypt's tourist trade has been forced to recover from a near-fatal disruption.

From the September 11 attacks on the United States, to bombings on Sinai resorts, to Red Sea shark attacks, to last year's Icelandic volcano -- headlines have a history of tearing through the business.

Still, the overall trend has remained ever upward.

"I am very optimistic tourism will pick up very quickly because I think tourists find the revolution positive," Hala el-Khatib, secretary general of the Egyptian Hotels Association, said, adding he did not see large-scale layoffs happening yet.

Mahmoud, a Sharm el-Sheikh tour operator who declined to give his full name because he preferred to go by his nickname "Mahmoud Crystal", said he had not had a customer in over a week but he is used to cycles of boom and bust.

"It's a crazy city. It's like a casino," he said as he sat smoking cigarettes in his empty offices, guidebooks in Russian, Italian and English arrayed before him.

Despite the drop in revenue, sympathy for the revolution runs deep among Sharm el-Sheikh residents. Many came from Cairo and the Nile Delta because there was no work at home.

At a popular restaurant chain, the bar staff chanted revolutionary slogans on Wednesday night, recalling visits to Cairo's Tahrir Square -- the heart of the protest movement -- and talking politics as they served beer to tourists.

Many in the tourism industry share the anger at patronage and official corruption that was one of the principal complaints of the protesters. The former tourism minister now faces graft charges.

Two of Europe's biggest travel companies said on Monday they would restart holidays from Germany to Egypt in March. The German units of British groups Thomas Cook and TUI Travel had cancelled holidays until the end of February.

Some tourists have already shrugged off the unrest, especially Britons. Unlike many countries that discouraged all travel to Egypt during the unrest, Britain advised its citizens to avoid big cities like Cairo, Alexandria and Suez but did not warn them to keep away from resorts like Sharm El-Sheikh.

"Before and after the revolution, I think it would have been fine. It's kind of like a country in and of itself here," Simon Box, a 27-year-old IT manager, said of the beach resort.

For European tourists drawn to the Red Sea's winter sun, he doubted a change in Egypt's governing structure would have much impact one way or the other.

"It will affect the people, no doubt, but tourism I think will stay the same," he said.