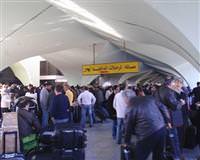 Governments around the world scrambled on Wednesday to send planes and ships to evacuate their citizens from turmoil in Libya, whose leader Muammar Gaddafi has vowed to crush a revolt against his 41-year rule.

Fears for the safety of foreigners were heightened after a Turkish worker was shot dead as he climbed a crane at a building site near the capital Tripoli, according to Turkish officials.

Turkey, with 25,000 citizens in Libya, is mounting the biggest evacuation operation in its history, and 21 other governments have asked Ankara for help getting their nationals out, Foreign Minister Ahmet Davutoglu told a news conference.

European Union states are evacuating some 10,000 EU citizens from Libya, a spokesman for the EU executive said during a European Commission news briefing.

The U.S. State Department said a chartered ferry with room for about 600 passengers was due to leave Tripoli shortly for Malta. "We're asking all U.S. citizens to head out to the ferry pier," spokeswoman Megan Mattson told Reuters.

Witnesses described scenes of chaos and panic as foreigners tried to escape the violence. Italy said estimates that 1,000 people had been killed in the uprising were credible.

"The time at the airport turned into a nightmare, fights began to break out. Everyone is frantic," said Adil Yasar, a Turk who arrived in Istanbul by plane late on Tuesday, adding that he and fellow evacuees had gone without food and water at the airport for two days.

Some 3,000 Turks who found sanctuary in a soccer stadium in the eastern city of Benghazi, where the uprising began, boarded ferry boats and set sail for home escorted by a Turkish navy frigate, while two French military planes brought 402 French nationals back to Paris.

"We are very happy it's over," one passenger told Reuters after arriving at Paris's Roissy-Charles de Gaulle airport.

"It was very sudden. Five days ago, we felt really secure. One would not have said that the situation was going to degenerate so quickly."

Turkish Prime Minister Tayyip Erdogan has warned Gaddafi's government against taking "cruel steps" to crush the uprising, and called on all sides to to ensure the security of foreigners.

Britain said on Tuesday it planned to send a charter plane to Libya to bring out Britons and was dispatching a Royal Navy frigate to waters off Libya in case it was needed.

Germany urged all its citizens to leave the country, and Chancellor Angela Merkel described as 'very frightening' Gaddafi's words that he was ready to die 'a martyr'.

Canada has also said it intends to evacuate its citizens.

Turkish construction company TAV was trying with its partners to arrange the evacuation of its 3,000 Thai and Vietnamese employees in Libya.

A Dutch military plane evacuated 82 people from Libya late on Tuesday, repatriating 32 Dutch citizens and 50 people from other countries, including Belgium, Britain and the United States, the Dutch Foreign Affairs Ministry said on Wednesday.

The Netherlands is sending another military plane to Tripoli on Wednesday, the ministry said.

A Ukrainian Il-76 military cargo plane was on its way to Tripoli to pick up 170 Ukrainians, including doctors, pilots and engineers who are working on contracts there, the foreign ministry said.

Greek passenger ships headed to Libya to collect Europeans and some 15,000 Chinese and bring them back via the island of Crete.

Amid increasing chaos, and resignations by top Libyan officials protesting against Gaddafi's crackdown, some flights had difficulty getting clearance to land or depart.

A Bosnian plane was awaiting permission from authorities in Tripoli to collect a first group from among some 1,500 citizens waiting to be evacuated, said Zoran Perkovic, the assistant foreign minister. Serbian planes were also awaiting clearance, Defence Minister Dragan Sutanovac said.