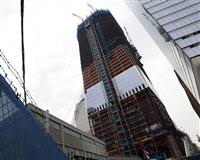 An interactive timeline chronicling the September 11, 2001 attacks hour-by-hour went online on Wednesday, with a fast-forward button to skip any video or audio accounts too disturbing for the visitor.

The virtual exhibit was organized by the National September 11 Memorial and Museum, which is building a structure at Ground Zero in lower Manhattan to honor almost 3,000 victims killed in the 2001 attacks on New York and Washington.

Until the building opens in September 2011, anyone interested in how that historic day unfolded can find out here.

"This timeline is a real attempt to organize what was an incredibly chaotic day into a format that's accessible for people to learn from," said Joe Daniels, the president of the National September 11 Memorial and Museum.

The timeline begins at 5:45 a.m. with video showing hijackers Mohammed Atta and Abdulaziz al-Omari passing through security in Boston's Logan Airport just prior to boarding American Airlines Flight 11, the first to slam into the north tower of the World Trade Center.

The timeline ends with then-President George W. Bush's address to the nation at 8:30 p.m. that night.

In between, there are gripping still photographs and first person accounts from fire fighters and other survivors who were at the scene when planes hit the buildings or when the twin towers fell.

One office worker's first-person account, from about 9:15 a.m., when the towers were being evacuated, recounts his descent down the stairwell from his office on the 47th floor of the north tower.

"There were three flows of people. The regular people like me going down, the people who were coming down from the other floors, who were very badly burned. No skin. No hair. Just burned," said Bruce Dellinger, who worked at a marketing firm, in the audio account.

"The third flow of people was security personnel and fire department people... in some of those eyes you could see, they knew something, that it was dangerous... while I was walking down, they were going up to their death, and I was walking down to live."

Organizers of the timeline took particular care to allow visitors to view and hear only what they feel comfortable absorbing, and included a fast-forward button to skip anything particularly disturbing.

"The material itself is difficult and emotional, and we approach it sensitively by allowing the user to modulate their own experience," Daniels said.