'Pick-pocketing and purse-snatching drop by 80%, mugging by 30%’ 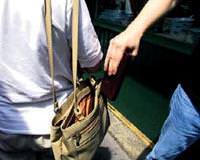 According to a 2010 Police Department activity report, pick pocketing and purse-snatching cases have decreased by 80 percent while mugging has dropped by 37 % and murders by 41 percent.

According to the Police Department's 2010 report, 229,965 police personnel service 76 percent of the population with one police officer for every 296 citizens.
The report, which was released on the Police Department's official website, states that figures from 2010 in comparison to 2006 show a decrease by 80 percent in pick-pocketing and purse-snatching incidents. A decrease of 37 percent was incurred in incidents of mugging and murders also dropped by 41 percent.
A decrease was also seen in car accidents. Despite an increase in number of vehicles on the road, fatal accidents saw a 19 percent drop.