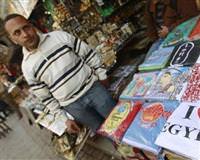 Young Egyptians have launched an "Egypt is Safe" campaign, students are cleaning up national monuments and drivers now take visitors around Cairo's Tahrir Square as an attraction, anything to get the tourists back.

Sites around the great pyramid at Giza, a Wonder of the Ancient World, the Sphinx and the cemetery at Sakkara have been nearly empty of tourists since a revolt started a month ago that ousted Hosni Mubarak, and now Egypt wants visitors to return.

"In terms of reviving tourism, the problem is currently Libya not us. The whole region is very hot right now," Karim Mohsen, managing director of Sylvia Tours Egypt, said, referring to an uprising against Muammar Gaddafi in the western neighbor.

"Libya is on the border with Egypt and what people see happening there is terrible and therefore they're afraid to come to the area," Mohsen told Reuters, in a view reflected by other tour operators and guides who expected several more idle weeks.

Those trying to draw tourists back to cruises down the Nile and Egypt's ancient artifacts want to turn the nation's political turmoil to their advantage. One proposed slogan suggests the revolution is "One More Reason to Visit Egypt."

Hundreds of students at Giza, visited by statesmen from Jimmy Carter to Napoleon and usually bustling with thousands of tourists, rallied at the weekend with "Egypt is Safe" signs, hoping to get the message over to the rest of the world.

"Please tell your friends not to fear the revolution. This is the new Egypt and it welcomes, you," said Heba, 18.

Life in Egypt is still far from normal, with many schools still shut, weekly mass protests at Tahrir Square, a curfew and tanks with soldiers at key intersections in Cairo.

But in symbolic visits of confidence, prominent U.S. Congressmen John McCain and Joseph Lieberman appeared in the square at the weekend. They join British Prime Minister David Cameron and others who have recently made the trip.

Camel drivers offering rides, teenagers with their trotting ponies and carriages, pushy guides and others selling postcards and plastic sphinxes at Giza all bemoaned the drying up of coach tours and organized visits. "Please mister, tell them come to the new Egypt," said camel driver Mohammed, 27.

Instead of foreigners, groups of Cairenes, many carrying national flags, took advantage of cut-price tickets to which they are entitled and explored their nation's rich heritage at Giza that dates back to 2,600 B.C..

The struggle to the top chamber of the main pyramid, made from 2-1/2 million limestone blocks, was made easier by the lack of visitors. There were no line for tickets.

At Cairo's citadel, a spectacular mediaeval fortress of crenellated towers built to fortify the city against Crusaders and which towers over Egypt's capital, patriotic student volunteers were cleaning ramparts and painting its hand-rails.

"We organized this by ourselves," said 15-year-old Leila, whose school along with others across the nation remains closed.

"It's a message, This is the new Egypt," she said, as an army of young people, keen to show their civic pride in a new democracy, also cleaned up in Tahrir Square, the nerve-center of anti-Mubarak protest, and across the neighborhoods of Cairo.

Some painted the pillars of overpasses in national colors.

For one of the few Westerners visiting the Citadel, barricades were raised and army soldiers surrounding a tank guarding the building, flicked V-for-victory signs and shouted: "Welcome to Egypt."

Entering the turnstile of this usually crowded attraction, which has a spectacular view of Cairo and is the site of the Alabaster Mosque built by Mohammed Ali, one official said: "Two more visitors today, maybe 20 tomorrow."

Dozens of tourists braved the revolution for the reopening of the world's greatest collection of pharaonic treasures on February 20 and were welcomed with roses, as craftsmen meticulously mended artifacts damaged by looting.

However, the usually busy galleries of the Egyptian Museum, which houses the golden death mask of boy king Tutankhamun, were virtually deserted after the doors opened and visitors have been coming back, but at a dribble.

"Going down to Tahrir and walking around it could be hard, but everyone wants to know what happened so we explain the revolution of course," said a cautious Mohsen.

"But I think we won't stop for people to walk around Tahrir," Mohsen said of the landmark, where protesters and security forces fought running battles, and from which the tanks have pulled back, but only into nearby side streets.

Egypt, which before the crisis had been receiving about $280 million a week from tourism until tens of thousands fled the revolution after travel warnings by their governments, has had its tourist scares before and has overcome them.

Attackers killed 58 tourists and four Egyptians at an ancient temple near the southern town of Luxor in 1997, six gunmen and three police died. That damaged tourism severely.

From 2004 to 2006, there was a series of deadly bomb attacks at Red Sea resorts in the Sinai. But tourists by that time had become more inured, given militant attacks in U.S. and European cities. Tourist bookings very swiftly recovered.

"Tourism in Egypt may get sick," said guide and Egyptologist Wagih Thabit, looking after his first visitors since before the uprising at the weekend. "But it will never die."